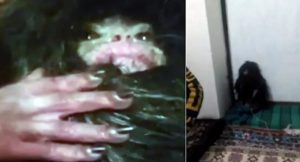 Footage of an unidentified creature caught in the former Soviet Republic Of Azerbaijan has gone widespread around social media.

Youtube comments have claimed that the animals are actually a monkey, while others are convinced it’s an Alien non-human creature.

While those looking for a quick answer say it’s a monkey dressed in a little ape costume, that seems too easy. The black fingernailed hands seem too big for the small creature to be a monkey.

Russian TV: A Huge Asteroid Changed The Trajectory And Now Flies To Earth