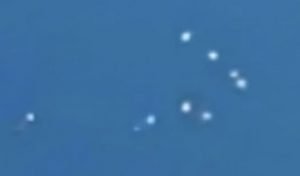 Chris – whose last name was not given – took the odd video before being sent to the popular MrMBB333 YouTube conspiracy channel.

It seems to show at least eight light objects in the blue sky.

At first glance, it seems they might just be a flock of birds, but the YouTube user soon rejects it when he sees something unusual.

“You’re going to see these orbs split in two,” he claims, just as two smaller orbs seem to split from the larger ones in the sky.

“Maybe they’re expelling something that looks like it goes towards the other one,” he continued.

MrMBB333 also pointed to the altitude of the objects that seemed too high to fly to any known animals.

“They’re not flying in a traditional V-pattern like birds do, they just kind of are up there wandering around.”

Deer camera in the forest caught a goblin