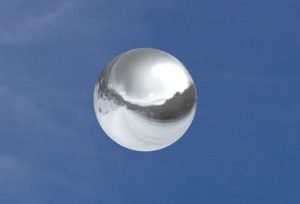 A UFO in the form of a flying silver ball was recently seen and filmed in Menlo Park, California, USA. The object appeared to be large enough.

A man from Menlo Park in California was resting near the house the other day with his mother and son when they noticed something strange in the sky.

The object was shaped like a metal ball, which was probably quite large, as it was clearly visible even from a decent height.

It was a clear day, not a cloud in the sky, and the slowly flying UFO didn’t look like a weather balloon or drone at all. It flew and rotated at the same time.

According to the author of the video, their entire family watched the object for 15 minutes before it slowly rose vertically and disappeared from view.

Some ufologists call such small objects UFO patrols and say that it is not difficult to see such objects if you know what time is best to keep an eye on the sky.

According to ufologists, patrols are alien drones that are capable of scanning the earth. These devices monitor the Earth, keep track of all events taking place on the planet and transmit this information to the main “headquarters”, where it is analyzed and, as necessary, decisions are made on “intervention” in the affairs of earthlings.