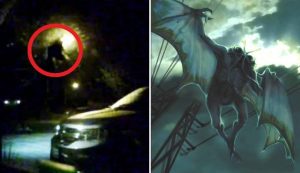 Despite the fact that the mysterious video shown below was received on June 25, 2018, it only now attracted researchers to supernatural and unexplained phenomena.

It is reported that an outdoor surveillance camera shot something strange at 02:17 at a car park in the American city of Rantula, Illinois. The surveillance camera recorded an incomprehensible shadow on the video, which flew rapidly against the background of a bright street lamp.

Many experts, familiarized with the intriguing video, concluded that we cannot talk about an insect or a bird.

Some Internet users believe that it was the famous Mothman, a giant bat, or some other cryptid. For others, we have the phenomenon of a ghost or demon. Meanwhile, skeptics are looking for a rational explanation. For example, it could be an ordinary newspaper, flown through the air due to a strong gust of wind.

And how many similar records from CCTV cameras are still not viewed or already erased? Strange and mysterious our world, isn’t it?

The mystery of the Bermuda Triangle is finally solved