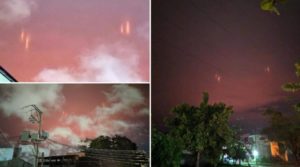 Unidentified bright, shining red lights over Villahermosa, Mexico, have confused thousands of people. The red lights appeared in the night sky on July 11, 2020 and as beautiful as they were, no one is sure what caused them, reports ufosightingshotspot.blogspot.com.

Residents of the small Mexican town managed to capture these elongated lights on their phones and posted the images to Twitter, here, here, here and here in an attempt to discover more information about them.

Since then, the theories have just been flooding in. Officials report that the red lights are sprites, however, this has been disputed numerous times.

According to YouTube channel Willease: Officials from the area have assured everyone that these lights are nothing to worry about and are simply red sprites, a completely natural and harmless occurrence.

Well, this may not be entirely true. Sprites occur dozens of kilometres up in the atmosphere and only last a fraction of a second.

These four mysterious were a mere few hundred meters above the surface of the Earth, far closer than any sprite would be, and lasted a fair while, long enough for amateur photographers to capture them on their smartphones.

It doesn’t look like a natural phenomenon. Maybe the red lights are a sign of paranormal activity or could it be a sign that something is going to happen soon?