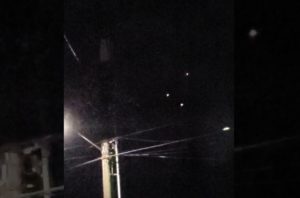 People began to see more often UFOs in the sky over the United States. Further evidence that something strange was happening was presented by Mario Rios on March 17 as video footage.

As you can see in the video, objects not only move, but also change their shape. An oddity was observed by the inhabitants of Washington.

UFOs periodically stopped, at such moments they could be considered in more detail.

Eyewitnesses are sure that they didn’t see airplanes, since aircraft cannot stop and completely change direction.

Some people say they regularly saw similar UFOs in the Ruston Way area in Tacoma, Washington.

The last unexplained spheres in the sky were not only red, but also white. As a rule, there are always at least three of them. People are sure that UFOs appear above their houses.