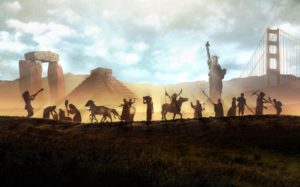 The view of the history of man accepted by conventional archaeology is that Homo sapiens evolved roughly 30,000 to 50,000 years ago in Eurasia. Later, humans crossed the Bering Straits land bridge into North America around 15,000 years ago. Thus there cannot be any indigenous man-made artifacts in North or South America older than around this date.

The trouble with this theory is that it can be maintained only by ignoring literally scores of archaeological finds that are unquestionably much older.

It was the discoverer of one such find, Dr Viriginia Steen-McIntyre, who had such an interesting story to tell.

In the late 1960s, Steen-McIntyre and Harold Malde, both of the U.S. Geological Survey and Roald Fryxell of Washington State University, were working under a grant from the National Science Foundation at a site called Hueyatlaco (pronounced way-at-larko) 75 miles south east of Mexico City.

Steen-McIntyre and her colleagues found very sophisticated stone tools there, rivaling the best work of Cro-Magnon man in Europe.

The scientists applied four dating methods to the finds and the strata in which they were found: uranium series dating; fission track dating; tephra hydration dating and mineral weathering study. The four methods yielded a unanimous date of around 250,000 years.

This finding fundamentally contradicts the belief of anthropology not only in the New World but regarding the whole history of mankind. People capable of making the kind of stone tools found at Hueyatlaco are thought not to have come into existence until around 100,000 years ago, in Africa.

Clearly, only two conclusions are possible: either modern humans lived in America 250,000 years ago, or there is some systematic error in the primary methods of geological dating.

What is most informative about the Hueyatlaco finds is the way that they were treated by anthropologists. Steen-McIntyre and her colleagues found themselves subjected to pressure to retract, and obstacles were put in the way of publishing their findings. A whispering campaign was begun against them suggesting they were publicity seekers or crackpots.

In 1975, Steen-McIntyre and her colleagues presented a paper at an anthropological conference. Inexplicably, publication of the conference proceedings was held up for four years while the editor ignored her letters. Eventually in 1979 she withdrew the paper in order to get it published elsewhere.

Writing in 1980 to the editor of Quaternary Research, she said, ‘The manuscript I’d like to submit gives the geologic evidence. It’s pretty clear cut and if it weren’t for the fact that a lot of anthropology textbooks will have to be rewritten, I don’t think we would have had any problems getting the archaeologists to accept it. As it is, no anthro journal will touch it with a ten foot pole.’

Eventually, the paper was published in Quaternary Research in 1981, but the findings at Hueyatlaco have been ignored since.

If Steen-McIntyre’s discovery was an isolated incident, then one might be cautious in accepting a single piece of data that contradicts the whole foundations of anthropology. But far from being isolated it is one of literally scores of such finds, all of which have received the same treatment.

Advanced paleolithic and neolithic flake tools have been found in Argentina, Canada, Mexico, New Mexico, California, Wyoming, and elsewhere by professional geologists and paleontologists. All have been subjected to campaigns of denigration and ridicule and the finds relegated to museum basements or store rooms.

In some cases (Hueyatlaco for instance) state or government authorities will no longer grant permission for investigators to visit these sites — presumably in case they make any more embarrassing scientific discoveries.