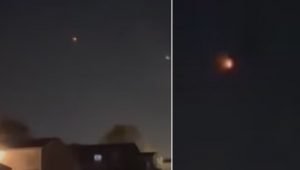 A Texas resident told local media that he has been seeing a mysterious orb in the sky for several months now, shining brightly with orange light. On one occasion, he was able to capture it on video (see below).

Sal Sanchez resident of Kyle, Hayes County, Texas, USA, and several other people have said they have been seeing a mysterious orange UFO in the sky for at least the past few months.

Sal first saw this moving object in January 2022, and after that several more times, including recently, last Sunday, when a “real light show” of several shining orbs appeared before his eyes.

Also, this UFO was seen by Sal’s neighbor and his relatives, and the ball was not alone.

“My daughter saw it too. There were two orbs going south to north, and they met another one that was flying north to south, and then it turned around and followed the others back.”

Sal doesn’t believe that it could have been an airplane, much less a drone, because the objects have always moved completely silently, although they flew quite low.

Meanwhile, local ufologist Jane Kyle became interested in this case and began her investigation: “If it’s a drone, it has to be a very expensive and advanced drone. Drones can fly at 400 feet, pretty high, and there are some advanced drones that can go 100 miles per hour,” she says.

Jane says she compared Sanchez’s video to other UFO videos filmed in other states and believes they are clearly not Chinese lanterns.