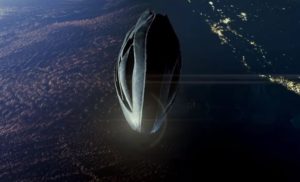 An unidentified flying object, which, apparently, is in near-earth orbit, seriously worried ufologists and other researchers. Some believed that the ISS camera captured the infamous Black Knight, reports Daily Star.

Independent researchers have speculated that this is an ejected NASA launch vehicle or space debris, but it may be something else that is beyond scientists’ understanding.

Ufologists believe that the ships caught in the frame belong to extraterrestrial beings who are increasingly opening themselves to humanity.

The “Black Knight” is, according to ufologists, a fragment of an alien starship that orbits the Earth, ostensibly to observe human activities.

It is believed that it was first noticed by the famous scientist Nikola Tesla in 1899, that is, 60 years before the launch of the first artificial Earth satellite.

In 1954, UFO researcher Donald Keyhoe told newspapers that the United States Air Force had reported that two satellites orbiting Earth had been detected. At that time, no country had the technology to launch a satellite.