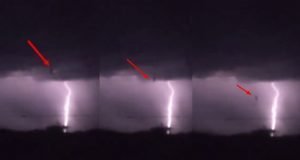 During a storm in San Antonio on October 16, 2019, a dark mysterious object fell from the sky during a lightning strike.

The dark object appears next to the lightning strike before it falls to the ground in an unknown area. It is unknown what the object might have been but what makes it weird is that it’s faster than the lightning.

The photographer said that she was recording to lightning on super slow mode when he caught the object.

“I was recording to lightning on super slow mode and caught something strange. What makes it weird is that it’s faster than the lightning”, wrote author of the video Julia Jannell.

“My dad loves the lighting, so I was just going to send him the video of how crazy it was on my side of town”, she added.

What it could be?