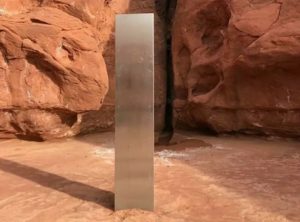 A mysterious monolith of shiny metal, two human height, discovered in the desert of the American state of Utah a few days ago, has disappeared, according to the local land administration office.

The find, reminiscent of an alien structure, was made by Utah Public Safety officials during a helicopter flight over the desert as part of a bighorn sheep count mission in the southeastern state. The authorities refused to disclose the exact location of the monolith, but people were able to find it two days after it became known from the media.

The American press noted that the object discovered in the desert is similar to an alien obelisk from Stanley Kubrick’s 2001 Space Odyssey, except that it is not black, but silver.

Authorities began investigating the objects’s origins, and the state land administration announced the installation was illegal. However, the bureau said they did not remove the monolith.

“We have received credible reports that an illegally installed structure called a ‘monolith’ has been removed … by an unknown party …”, the bureau says on Facebook. It is clarified that the monolith was removed on the evening of November 27.

According to the Salt Lake Tribune, all that remains of the monolith is the metal triangle that used to be at the top of the structure and a notch in the ground where the object was.

Colorado resident Riccardo Marino told the publication that on the way to the monolith he saw a truck moving away from the place where the object is located. When Riccardo arrived at the place, the monolith had already disappeared.

Who took the monolith? Ordinary people or authorities who are trying to hide something?

US military recently fired on a jellyfish-like UFO