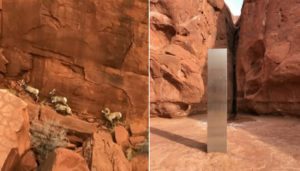 Friday, the Utah Highway Patrol posted a picture on social media showing a mysterious metallic-looking object discovered somewhere in the state during a count of big horn sheep, reports fox13now.com.

The object was discovered hidden in the “middle of nowhere” according to the post, with UHP asking the public what they think it is. One user suggested that “it fell off the UFO we’ve been seeing in Ogden lately.”

It is worth noting that there have been no official statements that an alien ship was seen in this area. But such a version may well be considered and such an option should not be ruled out.

The experts do not comment on this case in any way and, judging by their behavior, are not even going to find out what they actually found in Utah.