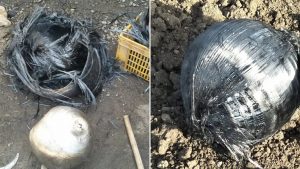 Residents of the Surendranagar, Kheda and Anand districts of Gujarat (India) reported mysterious metal balls falling from the sky.

Falling from the sky, mysterious metal balls left the locals in bewilderment.

Residents of the village of Saila in the Surendranagar district reported that a metal ball (or more than one) recently fell from the sky. The fragments were scattered across the fields. People said they were stunned by this mysterious phenomenon.

Over the past three days, strange black and silver metal balls have been found in Umret and Nadiad in the Kheda district, as well as in three villages in the Anand district.

After these strange incidents, the Physical Research Laboratory (PRL) intervened. It is a government institute under the Department of Space that conducts research in the field of space science.

Experts believe the strange metal balls are debris from a satellite. It’s just strange that none of the space agencies have predicted that the debris of the satellite will fall to the ground.

Almost always in such cases, an official statement is issued a few days before the incident.