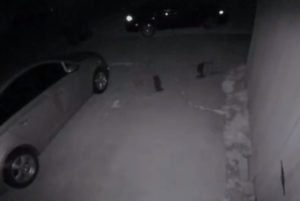 What strange creatures did the traffic camera in Dallas, Texas capture? Someone thinks that these are just big birds, someone is sure that these are mythical monsters.

This video (see below) was recently posted on the network and according to its author, he could not understand what exactly the CCTV camera filmed.

The video was filmed in Dallas, Texas, with a security camera installed near the road.

In the video, we see two mysterious black creatures that move on two legs (paws) next to a standing car. There is an assumption. that these are the so-called duende – trolls or goblins in Latin American folklore.

A more logical version implies that these are large birds, like owls. However, it is very difficult to say what two owls (which are solitary birds) needed to do next to the car on the asphalt at once.

Also, some commentators believe that if some of the creatures’ movements are really birdlike, then others movements, when they quickly approach each other, look very strange.