An identical phenomenon occurred ten years ago in the Ryazan region, when a huge crater reminiscent of a shell-hole appeared in the ground near the Sasovo village. Nobody was able to explain the appearance of the pit.

Such hole appeared before in the Rostov and Tula regions of Russia. Local townsfolk told Labyrinth ufologists there was a larger ground hole two kilometers far. It appeared decades ago.

Elderly people say village residents used to sacrifice sacks of grain throwing them in the hole to pacify ‘something’ under the ground. During the Soviet years they used to throw branches and stones in the hole, but they never managed to cover it.

Ufologists tried to find the pit, but they could not find the mysterious pit – numerous trees and bushes have grown in the field. Local people said there was another mysterious object in their countryside.

They said there is an ‘angry spring’ on the stream nearby. When a person comes to the spring to take some water, it starts ‘boiling.’ If one starts talking near the spring, the water in it boils harder and harder.

There used to be a church on the spot where the spring appeared. Legends say the church went under the ground when Napoleon’s army was advancing in the region in 1812.

The Kaluga region is located on limestone soil. Ground waters can dissolve such soil, creating limestone caves, the vaults of which may tumble down at times. This can be an explanation how the village church went under the ground.

It is not ruled out mysterious holes appear for the same reason – the ground was probably sucked in a limestone cave. These holes, ufologists believe, are of the terrestrial origin, although it is hard to explain why the walls of the pits are perfectly smooth and even. 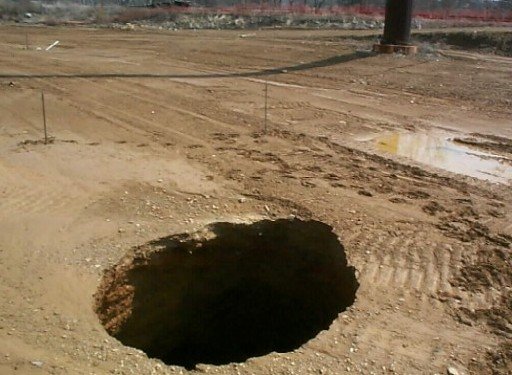 Residents of Novoselovo district in the Krasnoyarsk region have come across a mysterious phenomenon in the field. They discovered several tunnels of unknown origin in an area located some 100 meters away from the highway connecting the cities of Krasnoyarsk and Abakan , in the vicinity of the village of Kurgany, Siberian News Agency reports. There are about 10 holes in the field.

Each hole has an entrance to a cave-like hollow place in the earth. Some of the tunnels are big enough for a person of medium height to stand up straight. According to one of the suppositions, all the underground passages are interconnected in a network.

A few daredevils equipped with flashlights attempted walking across the tunnels. Local residents have a number of theories to explain the origin of the tunnels.

Some people believe the tunnels are the work of unidentified pranksters, others blame mysterious animals which reportedly dig holes in the ground. According to yet another theory, the tunnels may somehow be related to an earthquake that occurred in the area 3 years ago. Krasnoyarsk scientists have not yet made any official statements as to the explanation of the phenomenon.

Another mysterious phenomenon occurred in Guatemala. A 330-foot-deep sinkhole killed at least two teenagers as it swallowed about a dozen homes early Friday and forced the evacuation of nearly 1,000 people in a crowded Guatemala City neighborhood. Officials blamed the sinkhole on recent rains and an underground sewage flow from a ruptured main.

The pit emitted foul odors, loud noises and tremors, shaking the surrounding ground. A rush of water could be heard from its depths, and authorities feared it could widen or others could open up. Rescue operations were on hold until a firefighter, suspended from a cable, could take video and photos above the hole and officials could use the documentation to decide how to proceed.

The dead were identified as Irma and David Soyos, emergency spokesman Juan Carlos Bolanos said. Their bodies were found near the sinkhole, floating in a river of sewage. Their father, Domingo, was still missing, according to disaster coordinator Hugo Hernandez.

Several houses and at least one lorry have been swallowed by a giant sinkhole in a poor district of Guatemala City. The hole is said to be more than 100m (330ft) deep.

Residents said they had felt the earth shaking and heard loud noises before the houses collapsed. More than 1,000 homes were evacuated in the area. The national emergency agency said there had not been any casualties.

Officials said the sinkhole had probably been caused by a saturated sewer main. They had initially urged residents to stay at home on Thursday night, but later decided to move them to temporary shelters. Three people who had officially been declared missing turned up later, national disaster co-ordinator Hugo Hernandez said.

Mayor Alvaro Arzu said the sewers were now being repaired and help was being offered to those affected. Apparently, no one (especially the mainstream scientists) has been able to offer an explanation that is satisfactory or agreeable to all.

One explanation about these mysterious hole phenomenon are “tree holes” that were formed when lava or volcanic ash settled around a tree, burnt out the wood, then hardened and became the deep hole.

A second explanation is that, in place of the tree and lava, we have relatively vertical limestone deposits which had been dissolved away by natural acids (e.g., carbonic acid) that were either from underground water or which were formed during the rainy seasons.

The About.com site has the following to say under the heading “Karst Topography and Sinkholes” … When limestone interacts with underground water, the water dissolves the limestone to form karst topography – an amalgamation of caves, underground channels, and a rough and bumpy ground surface.

Karst topography is named for the Kras plateau region of eastern Italy and western Slovenia (Kras is Karst in German for “barren land”). The underground water of karst topography carves our impressive channels and caves that are susceptible to collapse from the surface. When enough limestone is eroded from underground, a sinkhole (also called a doline) may develop.

Sinkholes are depressions that form when a portion of the lithosphere below is eroded away. Sinkholes can range in size from a few feet or meters to over 100 meters (300 feet) deep. They’ve been known to “swallow” cars, homes, businesses, and other structures.

Sinkholes are common in Florida where they’re often caused by the loss of groundwater from pumping. A sinkhole can even collapse through the roof of an underground cavern and form what’s known as a collapse sinkhole, which can become a portal into a deep underground cavern. While there are caverns located around the world, not all have been explored.

Many still elude spelunkers as there is no opening to the cave from the earth’s surface. Inside karst caves, one might find a wide range of speleothems – structures created by the deposition of slowly dripping calcium carbonate solutions.

Dripstones provide the point where slowly dripping water turns into stalactites (those structures which hang from the ceilings of caverns), over thousands of years which drip onto the ground, slowly forming stalagmites. When stalactites and stalagmites meet, they forum cohesive columns of rock.

Tourists flock to caverns where beautiful displays of stalactites, stalagmites, columns, and other stunning images of karst topography can be seen. Karst topography forms the world’s longest cave system – the Mammoth Cave system of Kentucky is over 350 miles (560 km) long.

Karst topography can also be found extensively in the Shan Plateau of China, Nullarbor Region of Australia, the Atlas Mountains of northern Africa, the Appalachian Mountains of the U.S., Belo Horizonte of Brazil, and the Carpathian Basin of Southern Europe.

A third suggestion of an explanation is that the holes are actually chimney-type, or vertical, entrances into underground caverns or caves. The above explanations are, of course, possible and they have a naturalistic basis, without invoking aliens or magical creatures from the ‘deep’.

Note one interesting observation, if it can be considered an accurate one. It has been suggested that these deep holes appear to have been ‘dug’ from the bottom up. The use of the word ‘dug’ would suggest an agency other than ‘blind nature’ or randomness which the ‘hollow earth’ supporters would take it to support their views / beliefs. Shades of Jules Verne’s ‘Journey to the Center of the Earth’?

There has also been the suggestion that some occurrences of the Mysterious Hole are due to the actions of pranksters. Although, judging by the depth and verticality of some of these holes, the pranksters would surely have needed major heavy logistical support.

One of the easiest explanation offered is that a Mysterious Hole could easily be the entrance to a mine, natural or artificial, or maybe some superhuman creatures possessing intellect actually exist under the surface. The only thing is not clear yet if they originated on this planet or came from space.