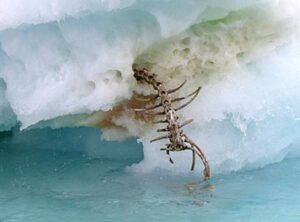 Eli and Donna Norris a retired Canadian couple took several pictures of what appears to be a large mammalian skeleton jutting from an iceberg off the east coast of Newfoundland.

The photo was taken on May 26th, 2007 and one month later, in June 2007 the picture was widely circulated. Marine scientists in Canada and elsewhere are puzzled by bizarre photographs.

It seems they were at a loss to identify the remains but speculated that it could have been preserved in the ice for quite some time.

The six pictures show what looks like a brown rib cage and spinal column, slightly bent, sticking out of a crust of ice. It appears that there is some tissue still attached to the bones, but no one can be sure.

Gary Stenson, a marine mammal scientist with Canada’s federal fisheries department, said he is quite sure the photo is not a hoax, but also said he couldn’t be sure what it was.

He said he was told the backbone was roughly 2.4 metres out of the ice, leading him to believe the spine belonged to a large mammalian creature. 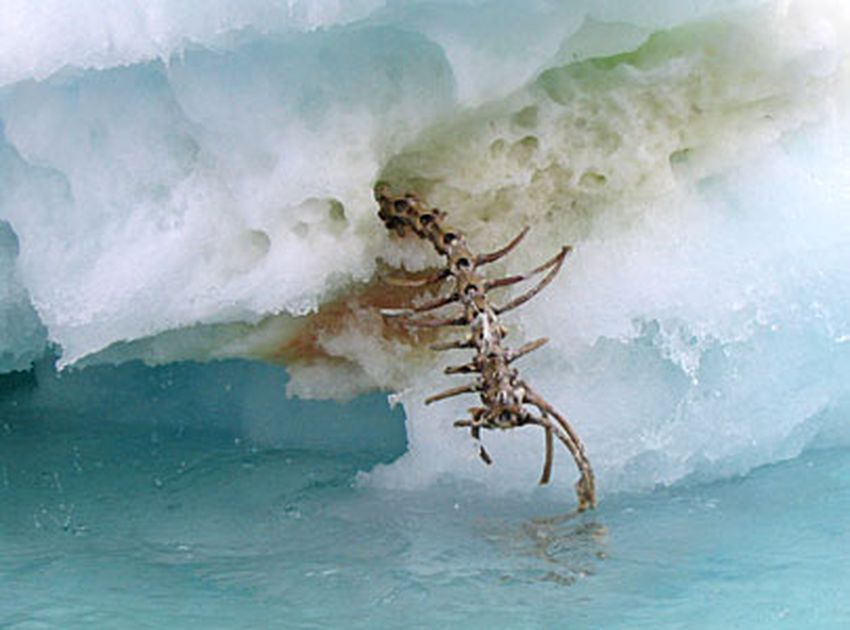 When Stenson want to confirm the authenticity of the pictures with the couple, the Norris family couldn’t be reached for comment at that time.

Ruth Knee (the couple’s friend who forwarded the pictures to the Fisheries Department) said they didn’t want to be interviewed, but said she could vouch for the authenticity of the photos.

The skeleton which were seen near Newtown, in Bonavista Bay, at least superficially, bears some resemblance to a plesiosaur, a creature said to have been extinct for millions of years. Unfortunately the skeleton has not been seen again so it appears there will be no definitive answers as to its true identity and fate.

Stenson’s colleagues have been debating whether the carcass belongs to a bearded seal, a walrus or a beluga whale. But without the actual specimen in his hands, Stenson said he can’t resolve the mystery.