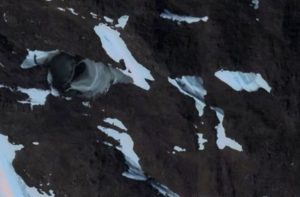 The strange giant “dome” was captured on Google Earth satellite images in Antarctica.

Images from the Google Earth mapping service were published on the YouTube channel MrMBB333, which regularly shares unusual observations and various mysterious phenomena with Internet users.

The author of the video says: “You can see what looks like a dome in this area here, kind of like on the side, or quite possibly some kind of disc. I look at it as a kind of air vent, and it might be a large disc stuck in the ground. ”

The researcher also commented on the second rock formation.

“Here on the right is what looks like another hole in the ground or snow and ice,” he continues. “It looks like a big square next to a round dome.”

Currently, the video has already gained more than 40 thousand views, and many users are puzzled by this structure. Many who found this mysterious “dome” by coordinates in Google Earth could not explain what it really is.