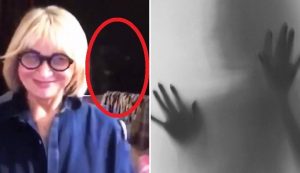 67-year-old writer and TV host Sally Morgan, who calls herself a psychic, shared a very mysterious video recording with fans. If you believe a woman who was once the personal medium of Princess Diana herself, something surprising happened recently.

Sally calmly communicated in a video chat with a friend when a strange anomaly suddenly appeared. Behind Sally flashed a translucent silhouette.

Turning on the video shown below, you can see the paranormal activity with your own eyes. An incomprehensible shapeless figure appears from behind the sofa on which the woman is sitting, and is rapidly sweeping to the right, hiding behind the scenes.

A friend immediately reported the British woman, and she was surprised no less than her companion. According to Morgan, it must have been one of the spirits of the old mansion “The Old Rectory Estate”, where she was then a guest.

“The Old Rectory Estate” is located in the English village of Blettingley, Surrey, and is considered an unkind place inhabited by various people from the subtle world. It is reported that some ghosts are quite aggressive and they are especially active at night.

8 thousand monkeys take over a city in Thailand: Animals keep people in fear