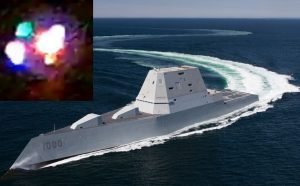 Portal The War Zone / The Drive, published a video with a mysterious UFO that pursued the most advanced destroyer of the US Navy “USS Zumwalt”.

It is believed to be capable of hiding from radar detection, and its special hull greatly reduces drag damage and improves fuel efficiency.

So it is not difficult to understand that the US command was extremely concerned and alarmed when unidentified objects with bright lights were seen above their ship at night.

A video taken in April 2019 shows an unidentified object with four lights in the black night sky. And the description says that there were as many as six such mysterious UFOs and that they circled over the USS Zumwalt, which at that time was located off the coast of Southern California.

The War Zone is said to have obtained the video when they filed a formal Freedom of Information Act request as part of their ongoing investigation into reports of mysterious “drone swarm” incidents that occurred intermittently near U.S. Navy ships throughout 2019 at Southern California.

The incident occurred at approximately 8:30 pm PT on April 24, 2019, approximately 17 nautical miles from the Marine Corps base at Camp Pendleton in international waters. USS Zumwalt reported that as many as six unknown unmanned aerial vehicles were observed flying nearby, at altitudes from 300 to 1000 feet (91-304 meters).

Moreover, it was reported that at least one of the mysterious drones flew right over the deck of the ship. By the way, a height of 90 meters is not an obstacle for military drones to strike.

It’s hard to say exactly what’s on the video. It could very well be just some amateur drone launched from a boat, because the object in the video does not perform any maneuvers that allow it to be attributed super speeds or violate the laws of motion physics.

Or is it still an alien ship, just taken at the time of the standard inspection of the object of earthlings.

Or these are secret reconnaissance drones of “unfriendly” countries, which for the United States are Russia, China, Iran, North Korea and some others.

It is curious, of course, how, in the presence of cutting-edge technology, radars, satellites, etc., the US military still cannot understand what kind of mysterious “drones” are rather brazenly pursuing their warships.

Mysterious hair bundles were scattered around the Californian city

Entire Solar System is changing rapidly, but nobody is talking about it