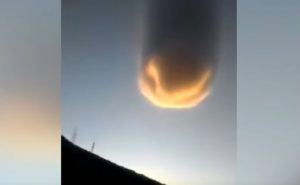 On Tuesday, May 14, residents of an unnamed Algerian city became unexpected witnesses of a very mysterious and intriguing phenomenon.

One of the eyewitnesses captured what he saw on the camera of a mobile phone and published the video on the Internet, signing it: “The meteorite stopped above the surface of the Earth!”

In the video we see a strange object in the sky, resembling a huge “tailed” ball with a shining “cross” at its end.

The version of the meteorite stuck in the air, of course, sounds too fantastic, but many Internet users are not in a hurry to write it off.

Commentators also talk about alien invasion, a religious sign, an interdimensional anomaly, a malfunction in the matrix, climate weapons, etc.

But what do you think it is?