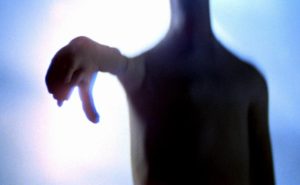 In his best-selling book “The Mothman Prophecies”, author John Keel describes the bizarre situation he encountered in and around Point Pleasant, West Virginia. Keel had learned of “The Big Bird”, (as the Mothman was originally called), from the UPI news wire. When he arrived, Keel found that the six to seven-foot tall flying man bat was just a part of the story.

He found witnesses claiming to have seen UFOs, floating orbs of light, and even encounters with the infamous Men In Black. Of all the stories, perhaps the strangest was told by a man named Woodrow Wilson Derenberger. Keel interviewed Derenberger and, while he seemed to like Woody (as he was called by friends), he didn’t believe his story. Woody was claiming to have had what is called a close encounter of the 3rd kind, many years before Steven Spielberg made the term popular.

As Woody told the story, he was returning to his home in Mineral Wells, West Virginia, after a successful sales trip to Athens, Ohio. It was a cold rainy evening at about 7:30 pm on November 2nd, 1966. He was driving on Interstate 77 near the intersection of route 47, the lights of Parkersburg could be seen in the distance.

Derenberger noticed a vehicle approaching from behind at a high rate of speed. As the vehicle passed, he could see that there was something else rapidly approaching him from behind, something unlike any vehicle he had ever seen.

The strange vehicle had no wheels and was levitating a short distance above the road. The craft was shaped like a cylinder with flared ends and a big bulge in the middle. The craft moved over into Derenberger’s lane and forced him to stop. A man then exited the craft and the vehicle rose about 40 feet above the highway.

Woody described the man as being about 6 ft tall with dark brown hair, combed straight back, and having a good suntan. The man had a smile on his face, was wearing a dark overcoat with a dark blue suit that was somewhat shiny. Derenberger made it clear that the man, whom he would learn was Indrid Cold, was a very normal looking guy.

Cold approached Derenberger’s truck and began to speak to the stunned salesman. The communication was not carried out in normal words. Cold spoke to Woody using telepathy, not moving his smiling lips the entire time. Woody used the mundane spoken word.

The conversation itself consisted of just a few simple questions, a bit of intergalactic chit-chat. Before making his exit, however, the mysterious Indrid Cold told Woody that they would be seeing each other again. Then it was over. The spaceman got back on his ship and it rose up into the air, Woody said he got out of there as fast as his old panel truck would go. Just days later, Derenberger would learn that Indrid Cold was a man, or alien, of his word.

When Woody finally got home he told his wife about his bizarre encounter, soon, he was telling everyone. Police, media, anyone willing to listen, Woody was willing to talk. He was on TV, radio, and in newspapers across the country. Then Indrid Cold paid Woody a second visit. This time, Woody’s alien friend did not arrive in his spacecraft, but rather, spoke to Derenberger telepathically as he was driving his truck.

But, before long, Indrid was showing up at Woody’s house, often driving a white VW Beetle. At first, the two stayed outside, (Woody thought his wife would be scared by his alien guest), as Cold told Woody all about his home planet Lanulos, in the galaxy Gyamedes. Cold even offered to take Woody for a ride in his spaceship. At first, Woody declined the offer, but before long he was zooming around the universe with space brother Indrid.

When the two visited Lanulos, Woody discovered that Cold’s home planet was a giant nudist colony. Everyone had great bodies, except Woody, who was slightly overweight. Derenberger also added to his list of alien acquaintances. There were Demo Hassan and Karl Ardo, (Ardo was second in command of Cold’s spaceship), as well as crew members Tonni and Daryl. Then there was Kimi, Indrid’s wife and a couple from Venus named Jitro and Elvaine Kletaw, (sounds a lot like Jethro and Ellie Mae Clampett from the then popular TV series, “The Beverly Hillbillies”). Not to forget the race of aliens that were thieves. They seemed to like to steal shoes, had feathers, and flew around in pink spaceships.

Even with space travel occupying much of Derenberger’s time, He still always made time to speak with the media. It was while appearing on a Washington D.C. radio show that a man named “Tom” called in. The man said that everything Woody was saying was absolutely true, he knew, because he too had visited Lanulos. ”Tom” continued to tell his story including names of aliens he had met. Woody chimed in that he also knew the aliens that “Tom” spoke of. The problem was that the man validating Woody’s story was just pranking him. (The caller was Thomas F. Monteleone, a college student at the time. Monteleone went on to become a multiple “Bram Stoker Award” winning Sci-Fi/Horror author.)

In the early 1970s, Derenberger published a book about his adventures titled ”Visitors From Lanulos,” but even with the book, Woody’s moment of fame was over. His adventures with Indrid Cold had cost him, most people saw him as a nut, or a liar, perhaps both. Woody’s wife left him, taking their 3 kids and moving to Cleveland with UFO investigator Bob Lalonde. Woody Derenberger never did admit that he made up the whole story. He did, however, do something that seemed to be as unlikely as the stories he told, he stopped talking. Woody Derenberger died in 1990.

In 1979, a UFO Was Shot Down in the North of the Moscow Region