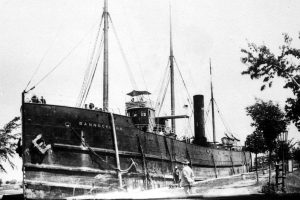 The Bannockburn was a 245 foot long freighter, built in England in 1893, which sailed the waters of the Great Lakes near the turn of the last century.

Owned by the Montreal Transportation Company, she was captained by George Woods, and carried a crew of 20 men.

In November, 1902, she was loaded with grain in Port Arthur, Ontario, which is today known as Thunder Bay. She was to sail downbound, with Midland, in Georgian Bay, as her destination.

Leaving Port Arthur on November 21, she sailed into the open waters of Lake Superior, the largest freshwater lake in the world. Vast and deep, the lake is known for violent winter storms. Bannockburn’s last confirmed location was fifty miles southeast of Passage Island.

The captain of an upbound ship, the Algonquin, claims that he passed the Bannockburn that day. After briefly looking away, he turned back, and noticed the ship had vanished.

Crewmen on board the Canadian steamship Huronic later reported seeing bright lights immediately south of them, which they believed to be Bannockburn’s. No further sightings of the freighter were reported.

By November 27th, the ship’s owners had declared her lost. Tugboats searched Lake Superior, but were unable to locate Bannockburn or any large amounts of debris. The only item recovered was a lifejacket, with the ship’s name on it.

No further wreckage, or bodies of the crew were ever found. It was if the entire ship, and all aboard, had simply vanished into thin air.

Eighteen months later, an oar was washed up on shore. The word “Bannockburn” was carved into the wood, and the letters, according to legend, were stained with human blood. This, and the lifejacket, were the only pieces of wreckage ever recovered.

Explanations for her disappearance

There were many theories about the fate of the Bannockburn. Some believe she was swamped in a violent storm on Lake Superior. The Algonquin’s captain theorized that an exploding boiler may have led to her destruction. Others simply claim the ship fell through a “crack in the lake”.

When the locks were drained at Sault Ste. Marie that year, a hull plate was discovered, and believed to have come from the Bannockburn. This damage may have led to a weakening of the hull, below the water line.

Perhaps she scraped the bottom of her hull on a dangerous rocky shoal just north of Caribou Island, tearing out the bottom of the vessel and sending her quickly to the icy depths.

Despite many theories of what may have happened, no trace of the ship, or her crew, were ever found.

Sightings of the “Ghost Ship”

Ever since that fateful day in 1902, the Bannockburn has appeared as a “phantom” on the waters of Lake Superior. The first sighting was reported in 1903, when a sailor claimed to have seen the ship steaming past Caribou Island, and then disappearing before his eyes.

Soon, the Bannockburn became known as “The Flying Dutchman of Lake Superior”. In another sighting, a seaman claimed to have seen the ship up close, and skeletal faces staring out of the pilothouse windows. Before long, crewmen on the lake were the freighter a “bad omen”.

The sightings of the ghost ship, however, are not restricted to seamen. Many people on land have reported seeing strange, bright lights, out on the water which disappear after only a few minutes.

To this day, captains and crews on lakers report seeing the Bannockburn, especially in cold and foggy weather. They all tell the same story, of the ship silently gliding past them, only to disappear from view within a matter of minutes.

Many believe the Bannockburn is doomed to forever sail Lake Superior, trying to find a safe harbour…