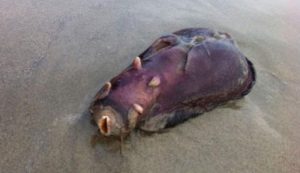 A resident of the American District of San Diego in the state of California was walking a few days ago with a dog near the former San Onofre nuclear power plant, which was decommissioned in 2013.

American and his dog were on the beach in the immediate vicinity of the nuclear power plant, when the animal suddenly discovered something strange on the sand.

There lay the body of an incomprehensible creature, similar to a large purple slug with an incredibly wide mouth.

The man took a picture of his unusual find and share it on social media network, asking what it could be. As you might guess, many commentators drew attention to the former nuclear power plant nearby, believing that we are talking about some kind of mutant. 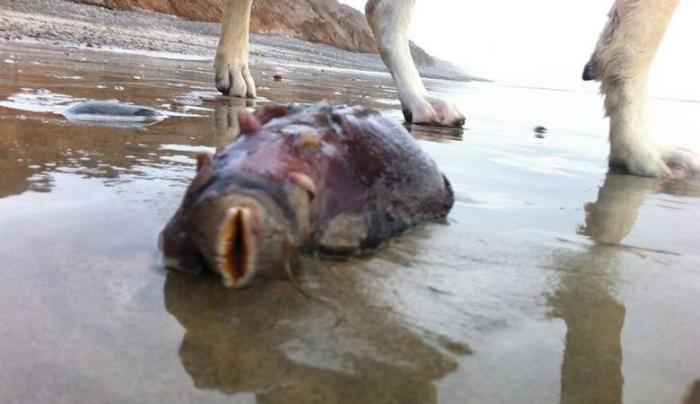 It must be assumed that during the 45 years of operation, San Onofre nuclear power plant caused serious damage to the environment.

In particular ammonia and radioactive water leaks, which, by the way, led to the closure of the station. It is not surprising that such monsters are found in the sea. It’s good that the little ones …

However, not all commentators agree with this, some believe that this is just another deep-sea animal, still unknown to science.

There are many unknown and unseen sea creatures in the deep sea, most of which are not yet explored.

Another world can be found in deep seas which have countless plants and sea creatures. Most of the newly discovered deep-sea creatures looked horrible, creepy and weird.

A man photographed a ghost in a Scottish castle