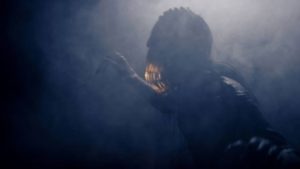 A lot of people have seen the strange creature roaming around in the region. The creature appears on the rooftops and in the front yards of the houses after 9 p.m.

Local residents claim that it is a dark shape that is not clearly visible due to darkness. It frequently causes noise by banging on the doors and windows of the houses.

Citizens have been waiting for the last four days to see what this creature is. But it’s said to be incredibly fast as it jumps over walls and runs from one house to another in a flash.

Last night, a group of villagers pursued, but the entity got to the terrace of the house and ran away after sliding down the trunk of a mango tree nearby.

Notwithstanding all the hysteria, no incident of robbery or assault by a supernatural creature has yet been registered. Locals also wonder that there is a mentally ill guy behind all this.

Local people are avoiding the lockdown by attempting to capture the unknown creature. And for this, a complaint has been filed at the Kunnamkulam Police Station.

Another complaint was also filed against a man for causing panic in the area. Officials also said that the police would increase patrols in the area.