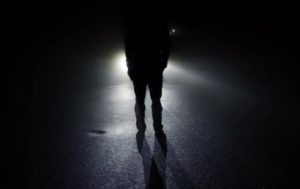 According to one locally-published book, the Ojai is “California’s Most Haunted Valley.”1 Situated a few scenic miles above the Pacific shoreline, the fictional childhood home of Jamie Sommers (the Bionic Woman of the mid-seventies TV show) is just far enough from the bustle of Los Angeles to make the area seem like any other small valley town.

There are, however enough Halloween-caliber stories here to keep any tour company busy throughout the year: the ghost of a world-famous spiritual leader, a bridge haunted by a burn victim, an update on the headless horseman story, and even a vampire.

Jiddu Krishnamurti dashed off a book called At The Feet Of The Master at the tender age of 12. In 1926, when he was 31, he was escorted to New York in fine style by Annie Besant, one of the founders of Theosophy. Besant considered the diminutive, nattily dressed Indian (who was born into the high Brahmin caste) to be nothing less than the 20th century’s world savior.

In 1922, while sitting under a pepper tree near Ojai, he had a spiritual epiphany, and his connection to the area was cemented. By 1929, the Theosophists had given up on him, and Krishnamurti went his own way after the amicable “divorce.”

He spelled out his reasons for doing so: “I have learned that each of us must do his own thinking…you cannot organize a system of truth; neither can you or I set up a religious standard for another.”

After an exhaustive life of lecturing and world tours, in 1969 the non-affiliated Krishnamurti retired to the Ojai Valley and organized a foundation of religious studies called, strangely enough, the Krishnamurti Foundation of America. He somehow felt at home in Ojai, and returned from a trip to India to die here in 1986.

In the mid-1990s, at least one witness claims that he saw the great spiritual leader walk out of his home and stroll through the garden, wearing his ubiquitous straw hat.

Other specters of the valley are less sanguine. Possibly the most famous ghost in town is known as “Charman.” The grotesque spirit wasn’t the victim of some horrible barbeque accident, but accounts seem to differ on whether he perished in a great brushfire in 1948, a downed plane, or a car crash.

Stories about the figure, its skin hanging in cooked strips from its skull and reeking of burning flesh, have been told in the valley since the early 1960s.

The apparition has been sighted numerous times near or on the Creek Road bridge, a few miles south of town near Camp Comfort County Park. He is said to startle anyone who dares to walk the road at night, and reportedly tore the leather jacket off of one terrified witness in the 1950s.

One story, probably one of hundreds told around late night campfires, says that Charman is the ghost of a man who was hiking back to his stalled car with a full can of gasoline late at night.

Some of the gas spilled on his clothes, and for some reason, he made the fateful decision to light up a cigarette, turning him into a human torch. Most accounts though, center around the big fire, and a homesteader who was unable to save his wife or family in the conflagration.

The fact that the stories started to bloom just as the baby-boom generation was reaching high school age may also have something to do with its popularity—replacing the old “killer with the hook” story.

Another popular tale (which seems to be a local version of the headless horseman) concerns the ghost of a headless motorcyclist. In the 1950s, a man was who was trying to pass a truck on the narrow mountain turns of Creek Road was decapitated by a wayward steel beam which became dislodged from

the truck bed. The incident happened with such suddenness that the motorcycle continued on, passing the startled driver, who promptly had a heart attack and crashed in a ravine.

The cyclist’s ghost still rides at night, looking for his lost head. Since the Ojai was mostly settled in the 20th century, it makes sense to exchange a flesh-and-blood horse for a metal one, and some researchers swear by the tale.

Joining Charman and the unlucky biker along the lonely stretch of road are a phantom hitchhiker, and numerous reported anthropomorphic mists and shadows. One late-night motorist even claimed to have seen Bigfoot around the area where Creek Road exits highway 33. A simple late-night drive on this twisting road, lined with gnarled oak trees, is enough to spontaneously generate spook tales.

In light of all this, perhaps it is not so strange that the Ojai Valley is also home to a vampire legend. Sometime in the 1890s, so the story goes, a strange visitor arrived from Europe and promptly bought a ranch near, where else, Creek Road.

When cattle and then people started turning up drained of blood, settlers started to wonder about their new neighbor, who didn’t seem to come calling in the daylight hours. Armed with the requisite crosses, holy water, and wooden stake, they crept up on the creature, lying in a stone sarcophagus under an oak tree.

A huge black dog tried to stop them, but the holy water sent the grotesque beast howling away in pain. Opening the heavy stone lid, the posse quickly drove the stake home and sprinkled some holy water from the local mission in for good measure.

“And the vampire has not troubled the residents of the peaceful Ojai Valley since.” No one seems to know where the casket is, but that shouldn’t keep the adventurous away.