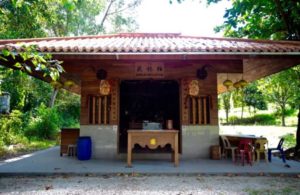 This is a tragic story, not even known to many Singaporeans today, of how a young girl died in Pulau Ubin (which means “Rock Island” on Malay) at the outbreak of WWI, and thereafter she became immortalized in a Chinese temple. An urn inside the temple, said to hold the remains of a WWI German girl, has been attracting devotees since the 1930s.

They call her the German Girl, or the Nadu Guniang – a Malay-Chinese appropriation of the words ‘Datuk’ and ‘Miss’. The power of the spirit of the German girl was so real and efficacious that it not only attracted local worshippers but someone wicked who stole her remains. They believe that somehow her spirit is lingering in the temple as perhaps an angel goddess.

On a lighter note, the German girl spirit was said to kindly give blessing to the worshippers, sometimes helping them win lotteries. What is the true identity of the German girl? How did a mortal white girl transform into a Chinese deity? What could have happened to the remains? Did they ever really exist? Is it just a legend?

Located in the tranquil coastal village of Pulau Ubin, northeast of Singapore, there was a coffee plantation owned by a German merchant who lived on the island with his family. According to the islanders, in August 1914 when the British came to confiscate the plantation, a young girl, the daughter of the plantation owner, became frightened and ran away.

On the fateful evening, the girl lost her way, fell down a steep cliff, and was killed. Meanwhile the rest of the family was captured by the British authorities and interned. A few days later, her body was found by local Boyanese workers from the plantation. The body was covered by termites so they threw soil over the corpse.

Often after that, when the local workers and residents passed the spot, they would say a prayer. When the war was over, the German plantation owner and the rest of the family were freed. They returned to Pulau Ubin to find out what had happened to their daughter but because of language difficulties were unable to determine where her remains were. They left Pulau Ubin and Singapore, never to return.

Eventually, a group of Chinese workers on the island carted her remains to the crest of the quarry’s hill and gave her a proper burial. Pulau Ubin resident Chye Leng Keng, 74, reveals that worshippers from as far as Thailand and Myanmar have come to pay homage as well, over the years.

In 1974, the grave was exhumed to make way for quarry excavation work and relocated to its present spot near Chye’s hut. He is the key witness to the strange proceedings that take place every time devotees troop in to worship the deity. Gamblers began to pray at the temple for good luck, and several of these gamblers were successful and attributed their success in winning to the spirit of the German girl.

The remains of the German girl were kept at the temple on the hill until 1974, when the property became the site of a granite quarry. Several local people exhumed the remains consisting of hair, an iron cross, and some coins and put them in a porcelain urn. A new temple on the quarry property was then built for the remains.

The coins were somehow lost (or probably ransacked) at the time the remains were moved in 1974. For all the fuss over the urn, Chye swears that it is actually only a replica of the original 1974 pot, which he believes to have been stolen by vandals simply for its beautiful Jiangsu design. The mystery has not only intrigued him but also caught on with two curious filmmakers.

Ho Choon Hiong, 28, and Michael Kam, 34, stumbled across the temple while making a documentary on Pulau Ubin’s nine temples and 11 shrines in 2000.

They have done the extra legwork of tracking down the former coffee plantation’s 19th-century land deeds to a certain Daniel Brandt and Hermann Muhlingans of Germany. But beyond these two names, they have failed to unearth further information on the supposed girl or her parents.

Yet Ho, who has been tracking this temple for two years, does not intend to give up – not least when there is talk that it may be torn down to make way for expansion of the Outward Bound School nearby.

For now, however, he is intent to unravel the other mystery behind the urn: whether it contains the ashes of anything vaguely, formerly human, or, as Chye insists, is simply a replacement vessel for the Jiangsu original.

Balancing on a stool and blowing dust off the stacks of offerings, the intrepid Ho scales the altar on bended knee. He pries nervously at the lid of the porcelain jar. The big moment arrives: The lid is cranked open. The urn contains nothing. Nameless, faceless, speechless – and now, formless. Why would anybody still worship an empty pot?

Singapore Paranormal Investigators (SPI) has been pondering some theories regarding the stolen remains. One theory is that the porcelain urn itself was a valuable antique and it was stolen by relic hunters. The other speculation is that the remains of the white girl have a strong spiritual force, and therefore the urn was robbed by people who practice black magic or sorcery.

Despite that the physical existence of the German girl corpse was no more in the 1970s, her spirit was made immortalized at this Chinese temple. Worshippers came to give offerings that include perfumes, cosmetics, mirrors, flowers, and fruits to the deceased German girl. It has been reported to SPI that people have encountered moving shadows outside the temple at night.

Recently, some members of a filming crew who reenacted the legend for movie production got possessed on the spot—one vomited repeatedly after touching the urn, and the other, who was dressed in a German girl costume, suddenly started to speak in German.

In the past few years, SPI has been investigating the place via a fusion approach of interviewing the villagers, digging into the historical records, and even consulting some spiritual mediums. Hopefully one day, SPI will be able to shed some light on the mystery, especially in the hope that the descendants of her kin would be able to reunite with the German girl.

Source: Encyclopedia of Haunted Places: “Ghostly Locales From Around The World” by Jeff Belanger