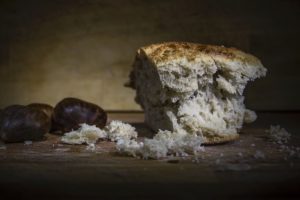 The Websters, a family with seven children, lived in a haunted farmhouse in Beverly. They heard strange noises, including footsteps and mysterious choir singing during the night. What unnerved them the most began during the first week of March 1903.

The family was poor and bread was an important part of their meals. One morning, they woke to find their bread had crumbled overnight and looked as if had been gnawed by rodents.

The Websters did all they could to prevent this. They put the loaves in a closed pan, with a rat-trap inside and another on top of the lid, sprinkled the floor was with flour, stretched two lengths of cotton across the room and locked the doors.

In the mornings, everything was undisturbed, but one of the loaves had totally disappeared and the other dwindled to half of its size. They said nothing for almost three months.

The situation was becoming unbearable. Mrs. Webster had seen the end of a loaf waste to entirely away on the kitchen table within an hour.

The family asked retired police constable Berridge for help. He brought two loaves of bread to the farm and locked them in the dairy with his own specially made lock The next day the bread appeared to be intact, but the day after, after cutting them open, he found the loaves hollow.

He suspected they weren’t baked properly, but the cavity gradually grew wider, and the second loaf began to shrink while he watched it.

He hid pieces of bread in other places in the house. Every time Berridge did this, they wasted away entirely. Berridge admitted that he was baffled.

One week later ten scientists from Beverley and Hull went to the farm and analyzed the bread. Microscopic examinations proved there was no fungus or microbe to cause this. There was nothing scientifically wrong with the bread to explain its wasting away.

After the Bread Was Gone, Cakes Were the Next to Be Affected

Then, Mrs. Webster baked cakes for the family. Although these were placed side by side with the bread, they showed no sign of deterioration. When the last bit of bread disappeared, the mysterious gobbler of the loaves attacked the cakes.

The destruction of a loaf was stopped if it was removed from the grounds of the farmhouse. This proved that the events were localized and, possibly, there was a bizarre type of haunting, attached to the family or the farmhouse.

Fodor was a distinguished parapsychologist, psychoanalylist and journalist. His meeting with Sandor Ferenczi, one of Sigmund Freud’s colleagues, influenced him to become a psychoanalyst.

Fodor read a book by Hereward Carrington, a prominent psychical researcher of his era, and met Sir Arthur Conan Doyle, a Spiritualist, sparking his interest in parapsychology.

Although Fodor’s main interest was the poltergeist, he also studied, gave lectures and wrote about mediumship, hauntings and materializations. He was the pioneer in researching the interrelationship between the parapsychological and psychological. Fodor wrote over seventy articles for psychoanalytic, psychiatric and neurological journals.

He wrote about, in his words, the “Goblin of the Loaf,” in Between Two Worlds, (Paperback Library Inc., 1967), the Raikes Farm phenomena. His sources were the London Express and a subsequent article printed in the British Spiritualist publication, Light, October 24, 1903.

In his professional opinion, the loaf and cake eating events were still unsolved.