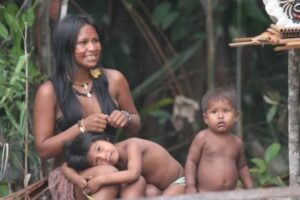 On the territory of Brazil, a mysterious tribe called Piraha lives, which amazed scientists with its worldview, which makes them happy.

The fact is that the people of this tribe do not know anything about time, there is no word “I” in their lexicon, and what is no less interesting – they practically do not sleep.

Linguistic scholar Daniel Everett told amazing things about this tribe. According to him, the tribe consists of five hundred people, but they are not isolated from the outside world.

The inhabitants use many useful gifts of civilization, including clothing and some metal products. And yet, none of them wants to move to cities.

People from the Piraha tribe do not like to sleep, because they fear that after sleep, which they compare with death, someone else will wake up in their body. Of course, they sleep, but their sleep lasts no more than 1 hour.

There is no concept of “tomorrow” in the tribe, which is probably why people do not store food for future use, eating everything at once. However, if they run out of food, they are ready to calmly endure hunger.

As far as faith is concerned, an equally interesting picture is emerging. The people of the Piraha tribe are sure that spirits live in the forests around them who are not averse to communicating with people.

The unknown forest power is open not only to the shaman of the tribe, but to everyone living here. In addition, the scientist was struck by the love of life of people who never lose heart, are open to communication and always smile.

According to Evertt, they are able to convey their attitude to “aliens” from civilization. The scientist said that after seven years of communication with them, being a believing Catholic missionary, he became an agnostic – the same as a piraha people.

He realized that there was nothing to teach them, and that they were absolutely happy people. Rather, they can become wonderful teachers for all of humanity.