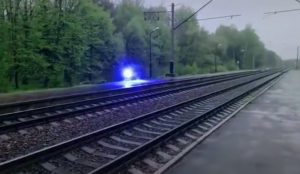 On January 3, 2020, a baffling video was posted by Vladimiir Kartsovnik on his Facebook page showing a blue glowing orb at the edge of the forest.

Although the place was not specified by Vladimiir, the video appears to have been made in Russia’s regions.

The orb then hovers over the tracks of the railway and stops on the other side of the tracks before it explodes.

Some speculate that this may be ball lightning. Ball lightning is an unexplained and potentially dangerous atmospheric electrical phenomenon. The term refers to reports of luminescent, spherical objects that vary from pea-sized to several meters in diameter.

Though usually associated with thunderstorms, the phenomenon lasts considerably longer than the split-second flash of a lightning bolt.

The actual existence of lightning ball phenomena is not proven, but they appear in a variety of accounts over the centuries.

So far there is no explanation for this mysterious phenomenon, whether it is ball lightning or evidence of a spirit or alien orb.