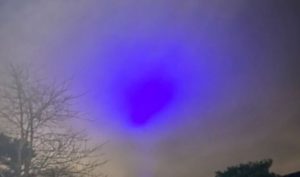 Sightings of a mysterious and yet unidentified, blue “blob” of light moving across the sky have been made across South Wales. One eyewitness said, “It just floated west across the sky. It’s been huge”.

Andrea Harries informed Wales Online she observed the unexplained phenomenon in the sky just after 6 pm on Tuesday from her Swansea backyard.

Andrea said: “I came out into the garden with the dog and saw a blue, purplish light.”

“It was bright but dimming every now and then. It moved over to Pontlliw and then towards Llanelli and then it just went.”

A woman described UFO as being a “fair size”, adding: “There was no noise and at the time there were no planes or anything – I don’t know what it was.”

Pixie Fear, a university student, saw the light out of her window while living at her home a few miles north of Swansea.

Pixie, 22, said: “Me and my brother came outside and this blob lit up the sky and flashed on and off. It was just floating through the sky going west. It was huge.

“We did a plane tracker but there were no planes about – it was going between Llanelli and Carmarthen and was so bright.

“It seemed to go pretty far, at least a few miles and quite quickly – bearing in mind it was far away so probably looked slower than it was.”

She said a plane or helicopter went past a few minutes later. The plane was white, she said, and looked very different to the mysterious light.