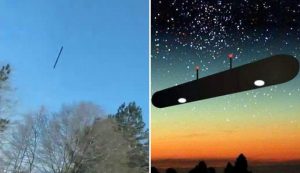 The video below was taken on Wednesday, April 3, by a resident of the American city of Toccoa, Georgia. The man, who decided to remain incognito, was driving a car along the local GA17 highway, when he suddenly saw something strange through the window.

A large and dark object, similar to a flat vertical line, moved over a roadside grove. As many of us probably would have done, an eyewitness immediately pulled out a mobile phone in order to capture the anomaly on the gadget’s camera.

According to the author of the video, he has no idea what this unidentified flying object was. Neither he himself, nor his acquaintances whom the American showed the video, have ever seen anything like it.

Even assuming that this is an alien device, it is very unique. On the Earth, devices of this kind are simply not designed, since they will violate the laws of aerodynamics and will not fly.

According to skeptics, this is just a line drawn on the car window. Such a theory, however, does not hold water, since is clearly visible, as the UFO is sometimes blocked by trees.