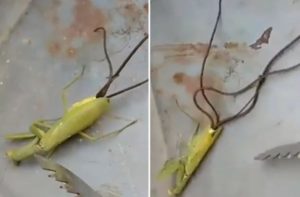 The scenes looked like something out of the classic Hollywood movie Alien. The footage was seen thousands of times on Reddit, where users urged the operator to burn everything in sight. Horror footage of an “alien creature” emerging from the corpse of a praying mantis terrified Internet users.

The video, which went viral very quickly, begins with a man slitting the back of a dead mantis. As soon as he does this, what looks like several long, thin tentacles crawls out of the bug.

By the end of the video, it can be seen that the creature or even creatures are more than twice the size of the insect they just crawled out of. On November 22, a video was posted by @jediwithanm4. The caption on the video reads, “Better call the Men in Black.”

The video immediately attracted a huge number of viewers. Some found it very disgusting, while others wrote that there was nothing interesting in the video.

This blood-curdling creature is actually a collection of horsehair worms, and their story is as gruesome as they look. They appear as larvae in the intestines of small insects that the praying mantis preys on. As soon as the unfortunate praying mantis eats them, the parasites begin to grow.

When they reach maturity, the worms secrete a protein that takes over the host’s nervous system and paralyzes it completely. Incredibly, they manage to direct the praying mantis to the pond to jump into so that the worms can break free. They are then freed to breed, leaving behind only the body of a dead mantis.