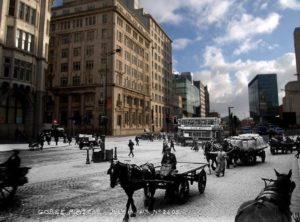 This story is of a young man named Sean, who, while shoplifting in Liverpool back in 2006, ran away from a Security Guard and headed down Hanover Street. Trying to shake of the Guard, Sean, 19, turned into a dead-end street called Brookes Alley.

By this time he was out of breath and started to get a tight sensation in his chest. He soon realized that actually it wasn’t a problem with him, but the atmosphere around him.

He waited for the Guard to come around the corner after him, but he never appeared. So, thinking he had given him the slip, he sauntered back out and started to walk down Hanover street again. But he soon realized that something was wrong.

The road looked different, and so did the pavement. He noticed cars driving by that looked very old fashioned, and the road works that he knew were there, were now gone. Soon he saw that the people around him were wearing strange clothes.

Crossing over to Bold Street, he noticed that there were traffic lights where there weren’t before, and bushes growing around the Lyceum, near a bar that he recognized.

He carried on walking, realizing that actually something was really odd. Then he began to panic. He realized that somehow he had stepped back in Time. And the timeslip was not going away.

Then he remember his Cell phone. Taking it out of his pocket, he tried to get a signal, but of course it didn’t work. Eventually, he began to really panic, but spotted a kiosk selling newspapers and headed over.

Leaning over the Stand, he took a look at the front page of the Daily Post. There in bold lettering was the date. 18th May 1967.

He wondered what to do. What happens if he can’t get back to his own time? What about family and friends?

So, speeding up his pace, he reached H. Samuel the Jewelers, and tried his phone once again. This time it worked. Sighing with relief he looked around and realized that he had returned to the present. But the strange thing was, he could still see, down the end of the road, people still walking around in 1967.

By this time Sean had seen enough, and dived onto a bus to go home. When he was interviewed by the local newspaper later, he stated over four times, the exact account.

Now, you may think that Sean was making the story up to escape from the guard. But the strange tale didn’t end there. When the Security Guard was interviewed, he stated that when he ran after Sean, and turned down the dead-end Alley after him, he said that Sean had completely disappeared!

When the newspaper checked out the facts of Sean’s story, they found that everything he said was historically accurate.

So, how would something like this occur? How is it that it only happens to some people and not everyone who walks through a specific area? How often does this phenomena occur?

Modern science, and specifically areas of quantum study, have opened our minds to a vast new way at looking at the world and universe around us and especially in the way that we consider time.

Most of us have viewed time as a linear truth. One second marches onto the next to create minutes and hours and days and months and so on. However, much has been made of theories which place time more as a layered concept. This layering would point to multiple times present at a singular location at any given moment.

Interestingly enough, this theory has been applied to ghost sightings as well. Perhaps we are not seeing the dead, the theory says, but rather living people in a different time and possibly even a different dimension all together.