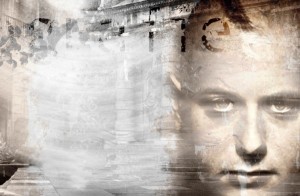 Extrasensory perception (ESP) or Sixth Sense is the proposed ability to get information by paranormal means independent of any known physical senses or deduction from previous experience.

The term was created by Duke University researcher J. B. Rhine to denote psychic abilities such as telepathy, the sensing of thoughts or feelings without help from the 5 known senses, precognition, the knowledge of future events, and clairvoyance, the awareness of people, objects or events without the help of the 5 known senses.

ESP is also sometimes casually referred to as a sixth sense, gut instinct, a hunch, a weird vibe or an intuition. The term implies sources of information currently unexplained by science. Popular belief in ESP is widespread, but skeptics are still not persuaded that there truly is a sixth sense because of the lack of reliable theories and information.

The existence of ESP abilities is highly debatable, without scientifically convincing demonstrations of the existence of ESP have been given. Parapsychology explores this possibility, and some experiments such as the ganzfeld have been suggested as good evidence of ESP, however its existence is not generally accepted by the scientific establishment.

I’m not going to delve into the ‘machanics’ of a sixth sense such as telepathy or clairvoyance here. Rather, I want to discuss one of the main complaints from the sceptical community. Namely, what is the point of paranormal talents such as cairvoyance? The point is valid. Unfortunately, they only ask the question and then move on, without waiting for an answer. Yet if we think about it, an answer is there to be found – and an answer that IS valid. A case study.

James Clarke went on a fishing trip to Colorado in August 1978. Moving from campsite to campsite, as he went to the Dolores River area he began to feel a foreboding. One particular night it was so strong that he described it as feeling a ‘malevolent force.’

Spending most of the night awake, he eventually went to the nearest town. There, he found out that five dangerous criminals had escaped from Arizona State Prison a fortnight earlier. Killing everyone in their path, including a family of four, the possessions of a young couple who they also murdered were eventually found close to where Clarke had been that night.

Episodes such as the above are many. They remain unexplained, but undeniable in terms of experience. It is as if a form of real extrasensory perception seems to be occuring. And such an ability can be placed within scientific feasibility.

Many scientists would disagree with this, but when we attach the term, survival value, it gives an evolutionary slant to the ability. As with instinct – a definite species trait – there could well be a need for such a talent. This is the thing with science.

As well as a phenomenon existing, it must also have purpose. Of course, this misses the obvious problem that, often, a ‘purpose’ is someting devised by the person asking the question. In effect, ‘purpose’ can be a subjective quality, only shared if there is a consensus that such a purpose is useful. And in terms of the paranormal, this could well apply. For instance, this case study could be useful.

Consider the case of Jim Corbett, a tiger hunter in India who found himself developing a form of sixth sense he called ‘jungle sensitivity.’ Many times he claimed an intuition, often unconscious, had saved his life. For instance one evening he noticed a strange red dust on his feet. Thinking back to where it came from, he recalled passing a culvert and, for some reason, walking to the other side, where the red dust was. Why he did it, he didn’t know, so he decided to retrace his steps the next day. He found a tiger’s paw mark in the culvert. He would have walked straight into the beast if he hadn’t diverted.

The above suggests a definite ’survival’ ability within this form of sixth sense. As such, although it may not be needed as much today, the ability does have an evolutionary purpose. Indeed, some researchers claim it is still an extensive talent.

Researcher Rupert Sheldrake has devised a number of tests to see if such a Sixth Sense exists. Using members of the public, his tests check whether a person can tell if they are being stared at. With over 5,000 case studies behind him, a typical test is for a group of friends to stare at another with a blindfold on, the person advising when he feels he is being stared at.

Some groups have had up to 60% success in guessing correctly. Indeed, Sheldrake advises that about 80% of those questioned said they had sensed they have been stared at on average once a month.

Writing in an April 2004 issue of New Scientist, Dr Ronald Rensink of the University of British Columbia claims we have evolved, over millenia, an ability to be alerted to wild animals approaching. Coining the term ‘Mindsight’, we still retain this instinctual ability to intuit things.

We don’t realise we hear or see these things. We just ‘feel’ them. If such a survival ability exists, then there is no reason why we couldn’t use such an ability when we truly had a need to do so. Writer Colin Wilson has regularly narrated two examples of such mindreach abilities. One morning he was driving in the country roads close to his home.

When he was about to take a sharp turn into his drive, he thought about the post van. He slowed down, and a moment later the post van braked an inch from his bumper. On another occasion he was visiting Los Angeles and told his family he would meet them in Disneyland. Only when he arrived there and saw its size did he wish he had been more specific. Eventually, he decided to relax his mind and simply walk where his feet took him. He walked straight to his wife and two children.

Residue of a Talent

We can clearly see in the above that, whilst we no longer need a definite form of intuition for day-to-day survival within raw nature, a residue of this talent still seems to be available at certain times – and can still be a life saver. Hence, the talent qualifies in scientific terms in that it has ‘purpose’, aids ’survival’ and fits into an evolutionary paradigm. And whilst this may say nothing for the ‘mechanisms’ involved, it is incorrect for science to dismiss the talent as purposeless. Such an ability – a form of ultra-mind – could well be a reality.

Reincarnation: Your Journey Through Karma