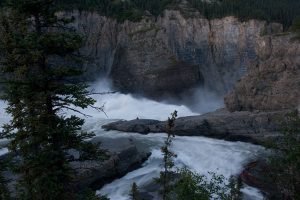 Nahanni National Park in Canada is considered one of the last remaining unexplored places on Earth, and if what the Dené peoples say is true, it may be for the best that it stays that way. Their history tells of a great evil deep within the wilderness, a powerful tribe known as the Naha, but the only evidence we have of the Naha is the headless bodies of those that venture into the gorge. Welcome to the Valley of the Headless Men…

Nahanni National Park Reserve is 11,000 square miles of mountainous wilderness. At its deepest is a long riverbed that flows between two peaks known as 200 Mile Gorge. To date modern man has not ventured into the gorge on foot, the only knowledge we have is by air and by the histories of the Dené who tell us that in this gorge is where the Naha live.

The Dené people are an aboriginal group living in the northern boreal and Arctic regions of Canada that surround Nahanni National Park. They’ve been there for more than six thousand years, yet their peoples and their culture have never expanded into the park, rather it was the other way around, it’s said that in the days when the Dené lands bordered 200 Mile Gorge a powerful and terrifying tribe would descend from the mountains wearing armor unlike anything in the lands and wielding fierce weapons that could decimate entire villages. Their trademark was the beheading of all those they killed.

The Naha were considered by the Dené people not to be a tribe, but to be the barbarian army of a great evil from the spirit world. More importantly, they were described as giants standing three times the height of a man. It’s no surprise then that over the thousands of years that followed the Dené border moved further and further from the Valley of the Headless Men at the center of Nahanni National Park.

The tales of the Naha are thousands of years old and the legends have been told only through word of mouth across generations of Dené so it might be easy to assume that these are just ancient myths.

However, the other portion of the Dené histories tells that 200 Mile Gorge, the Valley of the Headless Men is rich with gold. This has prompted a few brave explorers to venture into the wilderness of Nahanni National Park, none of whom were found with their heads.

The first of these was Willie and Frank McLeod, two brothers that in 1906 set out to find riches within the gorge. For two years they had vanished without a trace, until in 1908 another prospecting expedition discovered the McLeod brothers on their course. Both bodies were left unceremoniously with no apparent injuries other than their missing heads.

In 1917, Swiss prospector, Martin Jorgenson had been in the valley a while – long enough to establish a cabin and a small solo prospecting operation. In Martin’s case he was only barely inside the gorge, but his skeleton was later discovered missing his head, his cabin burnt to the ground.

In 1945 a miner from Ontario Canada who had set out to survey the gorge was found dead in his sleeping bag, once again his head missing, and not long after that a trapper named John O’Brien was found frozen next at his camp. His death was so sudden that those who found him remarked that he still held the matches to his camp-fire in his hand.

In recent years geological studies of 200 Mile Gorge by air have revealed numerous hot springs throughout the valley, which could indicate a massive underground network of tunnels and streams.

This discovery has even given rise to the speculation that the valley holds one of the ancient mythical entrances to the hollow Earth. Everything about the valley is speculation in fact as there still has not been a thorough land based exploration of the region, and the only people to have discovered the truth no longer have heads.