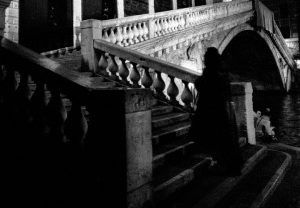 I am a photographer and filmmaker and several years ago I was staying in Venice. It was late in the evening and I decided to take a night stroll with my partner. As we explored the now deserted streets in Venice we made our way to the Rialto Bridge.

Most people by now were in their hotels asleep apart from the odd couple walking and exploring Venice. Once on the other side of the Rialto Bridge I took a few photographs.

The perfect Venetian scene with steps in the foreground, leading up to the famous bridge and a moon appearing between the clouds.

Several weeks later I was developing the 35mm film in my darkroom and I notice a shape on one of the wet negatives which really caught my eye.

Holding the negative up to the light I could see a figure on the steps of the Rialto Bridge. A figure that was 100% not there when I took the photograph.

I quickly dried the negative and then proceeded to make a print in the darkroom. I shall never forget how my heart was beating when the image started to appear in the developer as it slowly came into view.

As clear as anything a large cloaked figure appeared to be slightly hovering over the first two steps of the Rialto Bridge.

I really tried to think if anyone had passed me that night and I had just not seen them. The more I thought about it and the more I looked at it I realized I photographed a ghost.

Having not done anything with it for a few years I decided to make it into a short film which I have called ‘Negative29a’. (The film is available to watch on Youtube)

The Union Screaming House Of Missouri