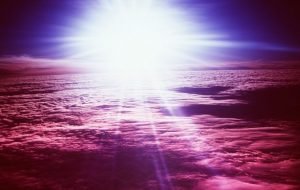 Anomalien.com reader Donna Anderson shares her story about an encounter with the unexplainable.

My name is Donna Anderson and I live in Winnipeg Manitoba Canada. I “died” in Jan. 1973 after hemorrhaging a month after giving birth to my daughter on Dec. 29, 1972.

I was admitted to St. Boniface Hospital with a bleeding problem related to her birth and was given a D. and C. It did not go well and I continued to have problems. It was in the afternoon and I started to hemorrhage. The lady in the bed beside me ran for the nurses and they came at once but I could feel I was going to die.

I could feel the blood running out of me and it started to pour onto the floor. I started to pray to God and I asked for just a little more time on earth to raise my baby and my older boy. This prayer was said only in my mind and then I lost all feeling from my waist down.

I knew I was going to die and the nurses were trying to get I.V. into my arms but they couldn’t get a vein. The nurse on my left was calling out my blood pressure and her voice started to get higher pitched as it dropped. She said, “Hurry, we’re losing her.”

I decided to just give up and the last thing I thought was “Whatever you will God.” I felt a terrible bang or flutter in my chest and I felt like I was choking. I then passed out for nothing more than a heartbeat of time but in fact I can’t be sure how long it really was. A second or perhaps a little longer.

I felt as if some force pulled me from the very tip of my head inside out and I exited my body from my chest and floated to the top of the room but I was looking down at the foot of the bed.

I could see and hear everything that was going on and my friend in the next bed leaned over to see around the curtain. When she did that she knocked down her vial of pills and they spilled across the floor.

Now Drs. were in the room and they were trying to place a needle into my neck. I was kind of interested in what they were doing but not really and I thought that my body looked funny as my mouth was open and I didn’t look like me to myself.

Then I looked at the wall at the end of the bed and it started to turn black. The way a movie screen looks to you except in reverse order. A dot of light started to develop and it got bigger and bigger.

I could still see everything “here” and hear what the staff was saying. I wanted to go to the light and I scared myself because as I thought it I moved or floated very rapidly toward it.

The split sec I thought to stop I stopped. I started to look down to see if I had a body of sorts but I didn’t. I had some kind of form but it wasn’t like here and I never blinked and I couldn’t see my nose or the brow of my forehead.

I realize it seems odd to be thinking such things but it’s what I noticed. I carefully thought about going into the light and I went into it.

As soon as I was in it I felt so wonderful and I was amazed that the light didn’t hurt my eyes because I was sure that I’d be blind if I looked at it with “normal” eyes.I was aware of love such as I had never known on this miserable earth and then of God.

I started to ask questions and I was startled to find I was receiving the answers at the same moment I asked them. It felt very strange to “speak” like this. Kind of mind to mind. Love enveloped me inside, outside and everywhere.

I felt as if I was in God. I can tell you that it was as if your mother picked you up and cuddled you and then said: “Don’t worry about anything your home now.” It sounds corny but that’s how it felt.

I was told things and everything made perfect sense. I have the memory of being told but after getting sent back I forgot the content or it was removed. I find it starnge that I remember being told but can’t remember what.

I do remember God saying that Love is the answer and that I was being sent back. I tried to explain that I had changed my mind about wanting to stay on earth and it was o.k. for me to stay with him or her (God). I at no time had a feeling that God, as we understand, is male or female but just a loving God. That is hard for me now that I’m back.

Anyway, while I was trying to talk God into letting me stay home I felt a great pressure on the form I had as if a strong wind hits you but doesn’t hurt and I was pushed out of the tunnel very fast and slammed back into my body.

I came awake and the Drs. and nurses were so excited and kept saying “Your o.k. now. Your going to be fine.” I tried to speak but I was so weak I couldn’t.

When I recovered enough I told anyone that would listen about what happened. I was so excited to know that there is a God and there is a life that death as we think about it is non-existent. We never “die”. We just go back to God from where we were to begin from. I have only one more thing to tell you that has never changed.

When I got back into my body I found it to be very heavy and clumsy and it’s a feeling that never left. I also lost all fear of “Death” and I look forward to the next and last time.

I stopped telling people about the experience because the hospital staff sent a shrink to see me and threatened to treat me for a mental disorder. I quit talking about it while in the hospital but as soon as I was out I started on the family, neighbours, friends and sometimes strangers. I was told I imagined it, blood loss, oxygen-deprived, dreamed it blah, blah blah.

I quit talking about it all together and just by accident I ended up on your site and decided I was willing to tell other NDE people my story. I shall never meet any of you here but lets get together “over there” and have a good laugh about it.

Perhaps you want to know if my life became great and wonderful and have I done marvelous things since being sent back?? No. My life never really changed a great deal but my attitude sure did. Love everyone to the best of your ability as it’s all God said to me to pass on. Goodbye and thank you for letting me share.

Deceased in the other world is met by loved ones, relatives and friends