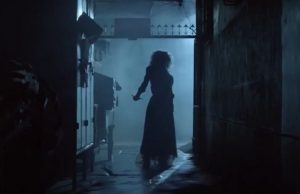 Okay, this is a true story, but I wish to remain nameless. When I was about 15, my grandmother remarried and they bought a new house. This house had only 1 previous owner, he had built the house. He died at a fairly early age, I think due to cancer.

My sister and I would stay with my grandma on the weekends. She had lived there quite a while before I had my experience. It was late and we were sleeping. In our room, we had this nightlight that looked like a gingerbread house.

I woke up in the middle of the night, and on the wall, where the light was showing through one of the gingerbread houses windows, I saw a man’s face coming out. I just layed there at first thinking I was just seeing things.

It was weird because I can still pretty much see what he looked like. He had a reddish toned hair, and a scruffy reddish toned beard. He came through the wall in sort of a 3-D type way and he continued out until he was above my bed. At that same time for some reason my sister, who was in the bed next to fell out of bed, and sort of screamed. It was then that I knew I was awake.

When I asked her if she had seen it too, she said no, that she had just been awakened by falling. So, the next day I spoke to my grandma about this.

She had known the man that lived there and said that it didn’t sound like the way he looked. She also told me that she had some things happen also.

She said that on some mornings you could distinctly smell bacon frying, but no one was up. On one morning, it was very early and she said she was awaken by the sound of a vacuum cleaner. Wondering what was going on she got out of bed.

She walked by my uncle’s room only to find that he himself was just awakened by the same thing. When they walked into the living room where the vacuum was, the sound had stopped, the vacuum was unplugged, no one had been vacuuming.

She also told me of a time that she was up late washing dishes and something caught the corner of her eye. When she looked up she saw a hand opening and shutting. It was just there for a few minutes and gone. My grandmother also had a dog. For no reason that we could see, the dog would at times become very irate. She would bark at something that wasn’t there.

My grandmother also said that she had seen a woman there before. As time passed my grandma ended up having to have a lady come stay with her part-time to take care of my stepgrandfather, who was elderly. Noone had told her about these happenings.

One day as my grandmother came home she found this lady outside, very shaken. So, my grandma asked her what was wrong. The lady said that she had came into the house and seeing that grandma was still away, she decided to lay on the couch and take a short nap.

No one was in the house at all, but as she rested her eyes, she heard footsteps near her and felt somebody touch her head and continue to walk past. She assumed that my grandma was back and that my step-grandfather had passed her on his way back to bed.

She decided to get up and go see if grandma needed any help with anything only to find that she was still the only one home. She bolted out of the door so fast that she forgot her keys, and had locked herself out.

My uncle who doesn’t really talk to much especially about things of this nature, had moved his bedroom downstairs in the basement. One morning though he came upstairs and commented on the fact that during the night he felt someone lay down beside him, but no one was there.

The last episode that I can remember was one night me, my sister, my grandma, and my mother were all sitting in the living room talking. All at once my mom and grandma jerked there heads towards the hallway. They then got up and checked the hallway to see if my stepgrandfather had gotten out of bed and was disoriented or something.

But they found him still in bed. They then came back into the living room and sit down. My grandma asked my mom if she had seen it too, and my mom answered yes. When I asked them what they both said they saw a black shadow walk into the hallway and stop.

Also, I forgot to mention that there was this pantry like place down at the end of the basement where my grandma kept her canned vegetables and such. For some reason none of us liked the feeling we got when we had to go down there.

Since then grandma has moved, we still can not figure out who these spirits may have been, we just know we’ll never forget that house.

Ghosts of Fort Mifflin: Specters and Phantom Sounds and Smells