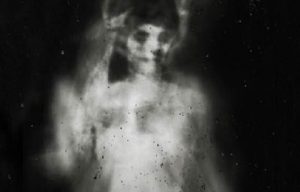 I started having weird experiences when I was about twenty-four and having trouble with my first marriage. I was very unhappy at the time.

Whenever I was just about to fall asleep I would feel someone touch my leg, It was sort of a reassuring hand, but it always used to scare the hell out of me. I would jump about six foot off the bed.

My husband at the time used to wake with a start, wondering what was all the fuss about. I now put it down to my guardian angle just trying to comfort me in a hard time, but its creepy feeling someone touch you that you can’t see.

I even had an experience when I was walking through my kitchen there.

Out of the corner of my eye, I saw something white go past me as quick as a flash. But there was nothing there. It wasn’t like a flash of light because it was solid.

It wasn’t long after that my marriage split up in Dec 92 (due to problems with his drinking and too much fighting) and I moved back with mum and my stepfather. They live in a Sydney suburb called Merrylands West (NSW, Australia for those unfamiliar with Sydney).

Mum’s house is about half-century-old, has five bedrooms, and is made of fibro. They have been living there now for some eighteen years.

It was originally a two-bedroom house and about fifteen years before mum and dad bought it the previous owners had an extension put on the back with a new master bedroom and another two more bedrooms.

Mum and dad slept in the new master bedroom in the extension, and the room I slept in was the old master bedroom at the front of the house, and it was always the coldest. I must add that even though I have lived in this house during my teenage years I have never slept in this particular bedroom. It was always just a spare room.

It wasn’t long after moving back home that I started experiencing those strange things again, but this time they were getting more frequent, and whoever they were was getting more game. I would be just about to drift off to asleep and I would either have someone stroking my hair or snuggle in next to me. Mind you, I didn’t find it very comforting. I was very frightened and didn’t understand what was happening to me and why.

Though they seemed to be harmless enough. With things happening to me like this, you can imagine I was not sleeping so well.

Then other things started to happen that were not so nice. One night I was sleeping soundly, then all of a sudden at about 2:30 am I woke with a fright. I could hardly breathe, the room was pitch black and so cold that I could feel the frost that my breath was making, it felt like someone was going to attack me. I felt very heavy, I couldn’t move.

I lay there so frightened for about thirty seconds. I then managed to get up and run to turn the light on, looked all around the room, but of course there was no one there. This was one of the most frightening things that has ever happened to me. I was glad for a dimmer on the light switch, I had the light on for the rest of the night.

Though it took me a long time to get back to sleep, and even then it was very light. I kept waking up to check that there was no one in my room. I’ll never forget this experience. I really felt that something evil wanted to get me in some way. This last experience was to happen again about six months later.

And then other things started to happen.

One night I woke up at 1 am to a loud crash. I jumped up and turned the light on. There I saw my doona (a down-filled quilt) (Stored in a plastic bag) on the floor near the door. Not spooky you might say, but the cupboard that it was on top of was on the other side of the room (about 5 meters away) and the top cupboard was also leaning inward, so the only way for it to fall was if someone had pulled it off the top of the cupboard and thrown it across the room. Needless to say, I had the light on for the rest of that night too.

Another thing that happened to me in the room was when I was sleeping with the heater on, I had an oil heater, so it can get rather hot if you have it on very high. I only ever had it on low, it was a very large bedroom but that was enough to keep the damp cold air out. One morning at about 7 am I woke up sweating profusely, It was so hot I thought I was going to die.

I jumped out of bed to open the door so I could breathe and to let some cool air in, and noticed that someone had turned the heater up to high. I asked mum if she had come in and changed it at any time, and she said she hadn’t. Things were getting very spooky, and mum used to get very funny if I ever mentioned anything that had happened.

She is very religious, so I never used to tell her too much.

I started to get very frightened, so I went looking for answers, I visited every reader hoping that they could tell me something to ease my mind. It wasn’t until I joined a Spiritualist Meditation Group that I started to learn more about these things. I started to understand that I was sensitive to these things, they showed me how to protect myself (White Light) against bad things. They taught me about my guardian angels (the nice ones) too.

I don’t live at mum’s anymore, I’ve married again, and things have settled down these days now that I protect myself, but I will never forget what happened at mum’s.

I since found out that the previous owners first husband died in that room. I don’t know if this had anything to do with what happened but I sure believe it could explain some things.