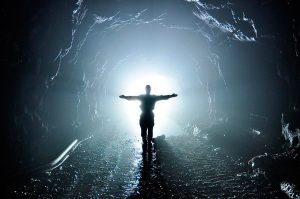 I do believe that there is life after death, because the body is one big battery that carries energy. This energy is made up of our own life force, our thoughts, what we see, smell, think, speak and touch. This energy is referred to as our soul, or as our aura.

When we die, this energy leaves our dead carcass and continues on. Where? I’m not sure. Energy cannot be destroyed and where it goes, is anyone’s guess. Could heaven and hell be worlds of pure energy? Is this where our departed energy goes after death?

If matter can have intelligence, why can’t energy? If there is a matter world, why can’t there be a world of pure energy? There are so many questions and very few answers. Perhaps one day, living human beings will know the full truth about the afterlife.

For right now, I will share some of my family member’s experiences with the paranormal that might be considered afterlife events: I will start off with myself first. When I was a small boy I lived in an old house on Effy Street in Fresno.

One night I heard a sound come down the sidewalk towards our house, which sounded like a rolling noise. As I looked at the window next to my bed, I noticed that on its own, it opened. A black tea kettle looking object floated to the halfway opened window.

This black object had a snout and the snout pointed at me. From the snout a mist came out and at this time I was screaming at the top of my lungs. My father came into the room to see what was wrong, the black object left and I could hear the rolling noise fade out into the distance. At this time my head was throbbing and I could see skulls flying about my room with wings. Even my own father’s face was a skull. The next morning I woke up and I was sick with the flu. From my open window I heard a serene woman’s voice call me by my middle

name…..”Dale, Dale, come here”. As I looked out the window into the orange grove, I saw no one. I ran from the window and fell into the heater burning my leg. As it turned night, my flu got worse and my mother half asleep came into the room and gave me a teaspoon of what she thought was cough syrup, it turned out to be poison and I vomited the poison out of my system. Shortly after this horrifying incident we moved from the house and never had these problems again.

The only other ghost I saw in my lifetime was a ghost of a small white rabbit. This rabbit was a family pet named “Bugs”. One day, I left Bugs tied up in the backyard, hooked on a large rope, in that way he could romp around the backyard. I discovered to my dismay, that Bugs had broken his neck from the rope, which got entangled with the bushes. The next night, I saw a ghostly Bugs dart through the garage.

After the one sighting, I never saw Bugs again and I gave Bugs a proper burial. My mother Rosemarie Roberts, related this true ghost story to me. When she was a little girl, she went with her brother and father to Mexico. They stayed at a friend’s home. On one night, my mother and brother had switched beds in the middle of the night, but didn’t know how this occurred. Both of them were dumbfounded on how they switched beds.

The following night, my mother stayed up and watched a small light in the room. The small light became bigger and started to form shape. It became a small boy holding a basket of roses. The small boy went towards my mother slowly, dropping rose pedals along the way. My mother noticed that the rose pedals would dissolve when hitting the floor. My mother screamed and the apparition disappeared. My mother was shown a child saint when she was a teenager by a nun and she thinks that the apparition she saw was the saint.

My father Paul Marceau Roberts once was illuminated by having a vision in his sleep of sitting by a rock and the clouds opened up and he heard a voice in a strange language. He was able to understand the voice and was shown the end of the world (there was fire everywhere) and World War III. He woke up and my mother said his face was glowing. Those are our family ghost stories. I have 2 brothers and 1 sister and they never encountered anything of the paranormal.

The paranormal encounters were only experienced by myself, my father and mother. My wife Patricia Roberts, had a ghostly encounter with her departed father, this is her story: “I spoke to my dad the night before he passed away. It was frightening in a strange way, because he told me to be good and he hoped I would have everything in life that I need. I wondered did he know ahead of time that he was going to have a heart attack in the park the next day? I really don’t know.

After receiving the disturbing news, my dad passed away. I stayed in my bedroom all night crying. The next night I had my dad’s shirt and a few other items that he died in. I sat there reminiscing the thoughts of good times with my father. It was a very windy night and not once had I ever left the garage door open. The garage door leads to the kitchen. I heard a click and my Springer Spaniel jumped up on all fours looking out the door. I didn’t think anything about it.

About 3 minutes later, I heard the door open and a loud slam of the door. I promptly lifted myself out of bed and felt a very strong presence down the hallway. My dog after 10 seconds at the door, started to bark and growl. I knew it was my dad, I felt him near me. All of a sudden he was at the door, I didn’t actually see him in form, but more like an outline of him.

My dog was still growling at the door and I yelled out: ‘You’re scaring me, please dad go away!’ After saying that I felt him walking away and the closing of the door. My dog stopped barking. It has been 15 years and he has never come back again. At times, I do feel his presence in my dreams and he forewarns me of dire situations that may come about.”

Why certain people have paranormal events happen to them and others don’t, is probably that certain individuals are more acceptable to ghostly encounters. It’s as if they were in tune, like a radio to a certain station. It comes back to the energy that our body has surrounding it.

Some peoples’ energy is in tune for paranormal events, others are not.