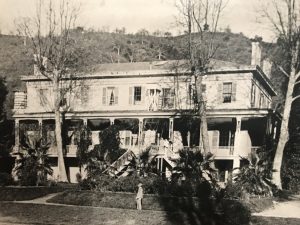 I worked for several years as an actress/director at a local theater which was built back in the ’50s as a dance hall. It is an addition to a Grand House (the Casa Grande Mansion) built in 1854. During the time that I was there some very strange, unexplainable things happened to myself and some other cast members that I think are worthy of mention.

First I would like to give some background into the mansion itself. I have done an extensive amount of research into this place and the area because historic places like that turn me on. The mansion is located in the town of New Almaden, CA which is famous for the Mercury and quicksilver it provided to the North for ammunition during the Civil War.

The Casa Grande was built in 1854 as a residence for one of the General’s. After it was finished, the General stayed there briefly and moved on. In its heyday it became the central point of the town and accommodated several dignitaries and even the Emperor of Japan’s son, who donated a Japanese pagoda in appreciation.

The arches of the Pagoda are now at the museum which resides in the main building. Over the years it held it’s glory, until around the late 1800’s when the quicksilver supply had dwindled and the locals started moving on.

It was then that the Casa Grande took on more shady dwellers. It was used as an illegal gambling house and was rumored to have been a brothel as well.

For 14 years it was completely abandoned for unknown reasons. In the ’40s and ’50s, a couple of entrepreneurs attempted to make it into a mini resort which eventually failed. For the past 20 years though the rooms have been divided for office space and different businesses.

Several people have reported seeing a man in a Southern uniform walking the decks at night, looking out toward the hills and this same man in one of the upstairs windows clutching his chest and reaching out his hand.

He doesn’t acknowledge anyone around him, just walks through a wall or vanishes before your eyes. After checking into an old newspaper and checking with the locals it seems that there were some Southern sympathizers who planned to intercept the shipment of the mercury and give it to the South.

On their way out to the mines there was an ambush and the men were either killed or held prisoner. This happened on the road directly in front of the Casa Grande. Some locals speculate that the man on the deck and in the window was one of the men being held prisoner in the house.

There seems to be a drawing force about the place. I recall wanting to stay all night after rehearsal was over and I was there alone. I would hang around and clean or talk to myself hours after the rehearsal had ended.

After I would drag myself out I would wonder why I had wanted to stay. One night I was there alone and the internal backstage phone started ringing.

Now, there are no outside lines to that phone, the only people that can call are people in the light booth or in the bar area of the theater. No one was in the theater and all the doors were locked. I mustered up enough courage to answer the phone.

All I could hear was static and clicking so I hung up and got out of there. About a week later I was cleaning up backstage with a friend of mine, all doors were locked, and it rang again. I picked it up and again, just static. I really felt like whatever it was liked me for some reason. I was never really all that scared.

One rainy night a couple of us stayed the night at the theater the roads were bad, it was late and we didn’t want to drive home. It was about 4:00am when I heard a woman’s high heels walking up the steps, on to the front porch and up to the door.

I woke my friends because I thought someone’s car broke down and they were coming to use the phone. I waited but no one knocked at the door. So I laid back down and tried to get back to sleep.

Just then I heard the sound of someone dragging their feet across the theater floor. It went about 20 feet and stopped right in front of us. It was dark and I couldn’t see a thing, my friends, who were also trying to get back to sleep heard the same thing and suggested we leave immediately, which we did!

The last experience I had was around 11:30 pm. The show was over and I was outside talking to the sound man. We were the only two there and had talked for about an hour outside. I was dying of thirst so I suggested we continue our conversation back in the theater so I could get something to drink.

He said he didn’t want to go inside the theater but if I was crazy enough to walk in there he would come with me. I had become quite accustomed to things happening so I wasn’t really scared anymore… HA! I unlocked the door and before I could completely open it I saw a flicker of light coming from the stage area. I asked the sound man if he saw it and he said he had.

Then it happened again and I could see that it was the strobe light that we used in the previous production. I said “Oh, it’s just the strobe, you must have left it on or something.” Just then his face got very pale and he suggested we leave at once.

I said, “Yeah, after I get my drink!” I went in to get my drink and exclaimed: “Hey I wish that light would go on now so I could see the tap.” Just then the strobe light went on again. I said “thanks!” and I left.

My friend was already at his car. I said, “hey what’s gotten into you, aren’t you going to turn that strobe off?” It was then that he told me the strobe light wasn’t plugged in! I went back the next day and sure enough, the strobe light was unplugged!

During the period that I was there, we had music turn on by itself, beer coming out of the opposite tap when pulled, strange noises, cold spots, the feeling of being watched, you name it. Nothing bad though, we all liked the odd things that happened, scary as they were.

A friend of mine was spirit sensitive and told me that there was the spirit of a woman there that really seemed to like me. She was lonely and enjoyed my company. Apparently, she envied me for some reason she said.

During my last play there we hired a medium, psychic, whatever you want to call it and her assistant to come out and tell us what spirits were there. She was a bit irritated that we were not interested in helping the spirits move on and decided to take it upon herself to do so.

After that it seemed rather boring, nothing eventful happened and the abeyance appeared to have vanished. She may have gotten rid of some of them but that whole area is flooded with history and tragedy.