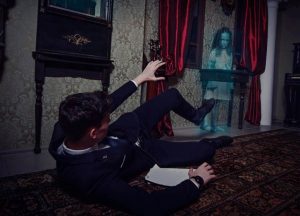 I came across your web page, and after reading some of the stories submitted, I decided to take you up on your invitation and submit one myself.

This story was told to me by an ex-boyfriend, Mike, when we first started dating. We were still getting to know each other, so when he told me he was VERY afraid of spirits, I believed him, because it’s not the type of thing you’d say if you were trying to impress a girl. I asked him why, and this is what he told me…

Mike’s first encounter with “ghosts” was about 10 -12 years ago, when he and his family (mom, dad, little brother George and Mike) were living in a house in the Northwest side of Chicago. This particular house had an attic, which was used to store the items that came with the house when before Mike’s family bought it.

Nothing too unusual mostly furniture and such. At this time, Mike was probably 15 years old, and his brother George was probably 9 years old. They were up in the attic one afternoon, goofing around, pretending to be acrobats/wrestlers etc. Eventually they got tired and George collapsed on the floor, while Mike sat in an old recliner that came with the house. The brothers continued talking until their mother called from downstairs, announcing that dinner was ready.

The boys had worked up an appetite, so they bolted out of the attic. Mike was the last one out and as soon as he shut the door behind him, he remembered that he left the light on. Knowing his mother would be mad if he didn’t turn it off, Mike opened the door to the attic took one step in, and froze.

The recliner that Mike had been sitting in was slowly turning towards him. Mike tried to command his body to run but he was so scared he seemed rooted to the floor. The recliner turned enough so that Mike could see the form of a knee, and it was at that point that Mike got the strength to bolt out of the room and down to the kitchen.

He told his parents what he saw, and of course, they didn’t believe him, but Mike refused to stay in the house any longer. He was so upset that his parents made arrangements for him to sleep at his aunt & uncle’s house that night.

Furthermore, that was the last time Mike ever stepped foot into that house. He stayed with his aunt and uncle until his family sold the house a few months later. Of course his parents objected to his imposing on his relative’s hospitality, but they were afraid to force him to come back, fearing he would have some sort of breakdown.

The next house Mike’s family moved into was still in Chicago, and not too far from where the old house was. Everything was going fine until one night when Mike’s family had friends over for dinner. After dinner, the adults and Mike sat around the island in the kitchen having coffee and talking, while year old George played outside in the back yard with the guests’ little boy, Sam.

At one point, George opened the kitchen door and ran through the kitchen past all the adults and straight into the adjoining bathroom. No one thought anything of this until about ten minutes later, when Mike’s dad questioned why George was taking so long in the bathroom. Mike’s dad knocked on the bathroom door, asking George if everything was ll right. No answer.

Mike’s dad tried to open the door, but it was locked from the inside. Everyone started getting concerned, until the kitchen door opened again and in came George and Sam. Mike’s father aske George how he snuck back out of the bathroom without anyone seeing him. You see, there is no other way out of the bathroom – if George came out, or even opened the door, he would have been seen.

In order to get back outside, he would have to go through the kitchen again. George swore up and down that he had not been to the bathroom at all – he was outside playing with Sam the whole time. Mike’s father asked him to explain about the locked bathroom door, but when they checked it again, it was not locked.

There were other strange incidents that happened in the house, mostly to Mike, more than anyone else in the family. The last incident Mike told me about was something that happened to him a few months before we met, when he was about 22 years old.

One night, as Mike was lying in bed, he woke up with an uneasy feeling. He was lying on his side facing the wall, and he felt as if someone was staring at him. It was the middle of the night and pitch black in the room. Mike turned over and opened his eyes and saw a black figure standing next to his bed staring down at him.

Mike shut his eyes and screamed for his mother repeatedly. When she came storming in the room Mike told her what happened. It seemed as if such occurrences happened sporadically, strangely enough when Mike was getting to the point of forgetting them.

Seems as if the spooks recognize this, and remind them of their presence every now and again.

I was kind of skeptical when Mike told me this story, mainly because I was just getting to know him, so I couldn’t tell if he was a habitual liar or something. But the way he acted and the way he told the stories was enough to make me wonder if he was a spook magnet. We only dated a couple of months, and maybe that was for the best…

Thanks for reading,
Effie