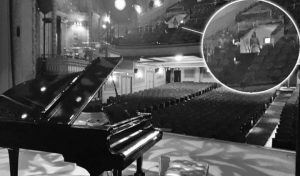 When the photo was taken, Chad Lawson had made a sound check at the Paramount Theater in Austin, reports classicfm.com.

The American musician got prepared for an iconic theater performance and took three pictures of his piano in the empty concert hall so he could upload one to social media.

But when he looked at his photos in the hotel, he noticed that something was wrong-in one of the shots. A strange ghostly figure appeared on the balcony.

For anyone raising an eyebrow of my previous post, these are the 3 quick-tap photos taken in quick succession. For what it’s worth.

“I took three quick-tap photos from stage to share,” he wrote. “In the photo you can clearly see someone in the mezzanine. Noticing it, I looked at the first and third pics and the person is absent.”

After doing some research on the estate, he found that a mysterious lady in a white dress who is said to appear on the mezzanine floor has been seen for years.