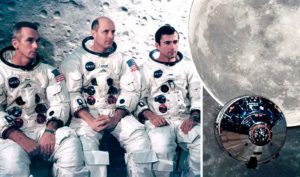 There have historically been many stories associated with the various NASA missions to the moon and a majority of these that could raise eyebrows have been locked away, to avoid raising conspiracy theories or outrageous ideas regarding the serious topic of space exploration.

However, as NASA has allowed some of the information to be revealed, the one tale about ‘space music’ has caught quite a bit of attention.

The astronauts actually debated over whether or not they should even send a report back to NASA as to what they experienced. This was only two months before the Apollo 11 mission was scheduled and they didn’t want to jeopardize future missions.

However, as the various strange stories are now being released, the television series “NASA’s Unexplained Files” on the Science Channel included this as part of their programming.

“If you’re behind the moon and hear some weird noise on your radio, and you know you’re blocked from the Earth, then what could you possibly think?”

The recordings that occurred during the Apollo 10 mission may not have been immediately heard by the earth crew, but none the less, the transcripts and the recordings were held until 2008.

Prior to that, they were listed as classified and were not made available to anyone outside of NASA. Even then, once additional transcripts were released, they were included with a large volume of data and recordings and anyone that was interested had to delve through years of transcripts to find anything that was outside of the normally expected information.

The recordings themselves include the sounds of the ‘space music’ and it apparently only occurred as they passed around the dark side of the moon. The ‘music’ continued for most of their duration on the dark side and over the course of an hour the astronauts repeatedly mentioned hearing this music.

As with everything that is a bit odd or different regarding space missions, NASA will not make any additional comments on the situation.

However, the television show has offered a few reasonable explanations for the ‘space music’ including charged particles causing radio communication interference, which did occur with the Cassini spacecraft as it neared Saturn.

The noises were also explained as a possible error in radio communications between the two lunar space crafts.

Strange Portals Connect the Earth to the Sun Every 8 Minutes