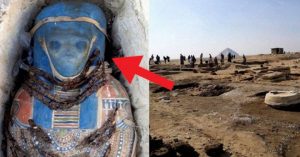 This is only an assumption caused by the first impression when looking at this strange mummy, whose face resembles some strange humanoid.

Archaeologists have discovered this unique tomb, carved into the rock not accidental, but they did not even expect such luck.

In this mysterious crypt were kept several dozen mummies, and many of them simply lay on the stone floor. The remains were preserved very well.

But all the archaeologists were more struck by the mummy with the face of an alien.

The fact is that the ancient Egyptians, mummifying any deceased, tried to preserve his appearance as much as possible. Moreover, this humanoid is buried with all due honors.

Egyptian archaeologists themselves do not rush to conclusions, believing that all the necessary analyzes must first be carried out to determine the exact age of this burial, and especially this unique mummy.

Then, perhaps, everything will become clear, why is it made so strange, or why is it similar to an alien.

Good or bad: Aliens are likely to look and behave like us, scientist claims