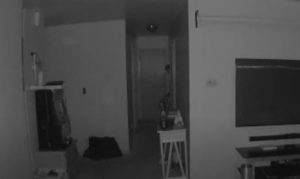 A young mother posted haunting footage of a mysterious figure coming out of her child’s room.

The Milwaukee, Wisconsin home is only occupied by the woman and her baby, and when CCTV video revealed a dark figure poking his head around a doorway in the house, the mother was absolutely terrified. It seems like the dark, human-shaped entity was looking to check if the coast is clear.

We can see this entity doesn’t have hands it has something like black tentacles.

On the r/ghosts Reddit forum, the mom posted the video and asked for advice.

She wrote: “Please help I don’t know what this is. It was in my baby’s room but when I went to check nobody was there.”

The creepy footage, which was recorded on November 7, was uploaded on YouTube by the popular conspiracy theory channel The Hidden Underbelly 2.0. Describing the “creepy” scene, the YouTuber said:

“Now the witness states there is nobody in the home but her and her small baby, so what’s alarming is this thing looks out to make sure that there is nobody around and then closes the door behind it.”

Youtuber advised that the woman move out if she couldn’t get anyone in to take a look.