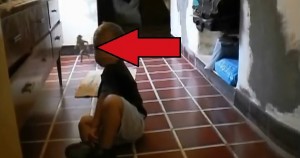 This video was recorded with a cellphone by Silvia in 2011 in Argentina. You can obviously see the appearance of a tiny creature while filming his son playing. According to Silvia, this little creature came out from the kitchen to the backyard to escape , leaving behind a nasty smell and intense discharge your phone.

Family members has always noticed that the child was playing and talking to himself in his room and in the corners of the house to nap time , but had never worried because they thought their age was normal. In January 2011 , Benjamin was playing as always in the hallway when Silvia noticed a bit of nervousness in and decided to take his cell phone to record his behavior when he watches “something” running in the background .

He thought it was just a field mouse (very frequent in the area) but then saw the actual play morphology and panicked screams must call your neighbor ( the husband was working ). Several years kept this secret until they decided to show this evidence for the world to see on the Internet.