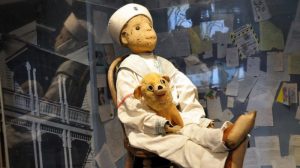 In the early 1900’s, a wealthy man by the name of Dr. Otto lived in Key West, and took several ‘servants’ (slaves) from the Bahamas. In what many speculate was actually an act of revenge, a Bohemian servant gave Robert Eugene Otto, a doll made of a wire frame, cloth, straw, and most likely, a soulstone (Possibly of the servant’s son who passed away at the time). This type of enchantment in some voodoo practices involves a small crystal being placed into an object, thus imbuing it with power by taking a soul of its own. Eugene’s sister died at around the time he was given the doll, and immediately took to Robert the doll. Eugene gave Robert the doll his name of Robert, and he made everyone else call him Eugene (Gene) instead. Throughout his childhood, whenever something bad would happen or something would be blamed on Eugene, he would say Robert did it.

More troubling were the inexplicable events that began to occur — glassware and silverware thrown about the dining room, servants locked out while on their nightly rounds, clothing torn up and bedding in rooms long unused disturbed and crumpled on the ground. Other beloved toys belonging to Eugene began to turn up mutilated and brutalized while deep in the night there was the sound of giggling. Eugene could often be heard playing joyfully in his toy room one moment and then, after a solemn silence, the sound of low conversation would trickle down to the servants’ ears, first in Gene’s boyish voice and then in an entirely different tone.

Sometimes Eugene’s voice would sound agitated, but the responding voice only sounded insistent, and it was these moments that began to trouble first the servants and then Mrs. Otto most. On one occasion, the concerned mother would burst in upon her child and, oddly and unexpectedly, find her son cowering in a corner of the room, and the doll perched in a chair or on the bed, seemingly glaring down at the boy. Eugene would continue to have a close relationship with Robert until he left to study art in Paris, he would meet his future wife Anne there.

Robert the DollThey soon were married and moved into his former home in Key West, which is now known as “The Artist House”. Eugene had craftsmen construct a room scaled to Robert’s size built in the third floor turret of his victorian style home, and even had furniture built, and the ceilings lowered. The marriage was a disaster from the start because Eugene insisted on Robert accompanying the couple everywhere including the dinner table and next to the newlyweds’ bed. Children on their way home from school (and many have been interviewed–always with the same results) claim that they would see Robert move around in the upstairs windows even when no one was home, and on some occassions, he would jump from one window, move to the other side, and go into the window on the opposite side of the room. As Eugene aged, he became increasingly abusive to Anne, and it was discovered that on many occassions, he would lock her in a slanted closet beneath Robert’s room under the stairs for several days at a time. After Eugene’s death and burial in the Key West Cemetery, Anne left for her family’s home in Boston, and allowed the house to be rented out. 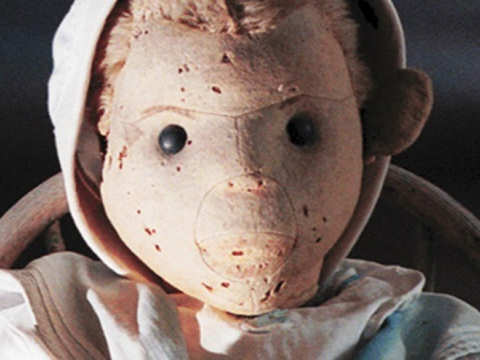 When Anne left, she left Robert locked in his upstairs room, and put in a lease agreement that ‘Robert must at all times remain the sole occupant of the attic room’, or the contract was void. This remained true up until her death in 1976. The first new reports were from a plumber working after Anne left. The plumber reported:

“I was doing some work in the larger part of the attic of the house. The people there wanted to make it an additional room so I was running the lines for a new toilet. The doll looked pretty creepy sitting there on the little chair holding its stuffed animal, but I had workRobert the Doll to do so I didn’t think much about it at first. As my work continued I had to make a few trips to get some parts from the van. Each time I returned I could swear the doll had moved a little bit. Like I said, I had work to do so I ignored it as much as I could, but when I was just about finished with the job and started descending the stairs, I heard a little kid giggling behind me. When I turned around the doll was on the opposite side of the room. The first thing I did was look to see where the kid was, but no one was there. I wasn’t really frightened, but it was weird so I just continued down stairs and left. Some of my tools are probably still up there.”

Future occupants reported hearing noises upstairs including footsteps, laughter, and crashes, and upon inspection, found that Robert had moved position from where they left him. At this time, usually he would only cross his arms, move or cross his legs, or move from chair to chair. The occupants were so disturbed by this that they locked him in a sea chest in his room, thus staying true to the lease agreement. Robert was committed once again to an attic box. But this is said to have pleased him no more than it did the first time it was tried, and the nights became unbearable for the new owners who reportedly found Robert in all manner of places, in all manner of predicaments. When the doll was found giggling and holding a kitchen knife at the foot of the new owners’ bed, there wasn’t any Eugene Otto to blame it on. The new owners left in a hurry and Robert the Haunted Doll was moved to his new home at the East Martello Museum in Key West, where he is well guarded.

After many years, Robert was finally rediscovered in storage at the East Martello Museum, and due to popular demand, was put on display. Many people have speculated that Robert was losing energy when he was locked in the chest for those many years, however, now that he once again has human contact, he is draining energy. Perhaps this accounts for the three pacemakers that have stopped in front of him, the many, many reports of new camera batteries dying in front of him, the many cameras that have stopped working in front of him (the leading authority on Robert spent 6 rolls of the film and got only a handful of shots to develop), and the increased activity of the doll. Museum curators report that Robert often changes position overnight even though he is locked behind glass in a case inside a brick museum with locked three inch wooden doors and bars on every window. People who come to see Robert also report his facial expressions changing before their eyes. Believe what you want, but the story of Robert the doll remains one of the creepiest tales out there.