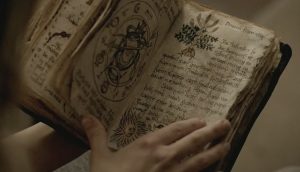 The definition “grimoire” comes from the Old French word “grammaire” which meant “grammar” and was used to relate to all books that were written in Latin. Nevertheless, by the 18th century, the term had taken on a new meaning: medieval European magic textbooks.

Grimoire were collections of spells, instructions on how to create magical objects, and guides to summoning demons, angels, and spirits. They often included astrological dioramas, lists of mystic entities, and even instructions for mixing medicines. While in present society the term “grimoire” has come to encompass any kind of collection of magic, authentic grimoire were based off the magical traditions of Jewish, Muslim, and medieval Christian rituals and texts.

Therefore, authentic grimoire didn’t usually contain Pagan rituals or magic. I have collected a list of ten of the most influential and historically significant grimoire throughout history. My goal was to present them in chronological order. However, because many grimoire don’t have definite publishing dates, I have had to take liberties in arranging them. Also, many grimoire had multiple names. For each entry I have tried to include their most important ones.

The Munich Handbook is an unusual grimoire in that it focuses on demonic magic and necromancy. It almost completely glosses over angels and the rituals for summoning them. Interestingly, it is believed by experts to having been written by none other than a member of the clergy.

Many of its spells include the sacrificing of mythological and folkloric creatures and animals. For instance, one spell for creating an imaginary banquet involves the sacrifice of a hoopoe (a colorful bird found throughout Afro-Eurasia). The book is also important for more than its magical contents. It is a window into how the clergy and learned Christians viewed and practiced magic during the Middle Ages.

The Grand Grimoire is a book of black magic that claims to have been written in 1522, but may have originated after the 18th century. It is considered to be the most evil and dangerous grimoire in existence. The text has a sinister purpose: the summoning of Lucifer or Lucifuge Rofocale (the demon in charge of the government of Hell) in order to make a Deal with the Devil.

It also contains a hierarchy of infernal spirits. But in addition to the summoning of demons, it contains a large number of spells, formulas, and secrets. These include spells to make people dance completely naked and invisibility. But be warned! The Grand Grimoire is considered to be so atrocious that even experienced magicians and practitioners of the occult warn against it.

The Heptameron of Peter de Abano was written by noted Italian philosopher and astrologer Pietro de Abano who died in prison during the Inquisition on claims of heresy and atheism. He lived from 1250-1316, but his Heptameron wasn’t published until the late 1400s.

The text is a manual of planetary magic. It details the rites for summoning angels for each of the seven days of the week. It also contains instructions for the creation of magic circles, the consecrations of salt, water, and incense, and planetary hours. This grimoire was especially important as it influenced the Lemegeton, a famous 17th century book on demonology.

The Three Books of Occult Philosophy was written by famous German magician, astrologer, and alchemist Heinrich Cornelius Agrippa. The books dealt with Elemental, Celestial, and Intellectual magic. These three kinds of magic are subdivided into many other different disciplines that include the four elements, astrology, Kabbalhaism, numerology, angelology, scrying, and alchemy.

The three books were landmarks in discussing magic in scholarly and intellectual terms. They also contain a large amount of pagan and Neoplatonic magic. It is also a source of great curiosity as it makes references and provides extracts on magic from obscure and/or lost works from famous historical figures such as Pythagoras, Ptolemy, Plato, and Aristotle. Even by modern standards, they are considered to be the authoritative texts on magic by occultists.

The Book of the Sacred Magic of Abra-Melin the Mage was originally a collection of magical and Kabbalistic secrets. However, it gained particular popularity when it was later adopted by the Hermetic Order of the Golden Dawn (a magical order in Great Britain during the late 19th and early 20th century) and the religion of Thelema (developed in the early 20th century by Aleister Crowley).

The text itself is a kind of epistolary novel wherein Abraham of Worms describes his journey from Germany to Egypt along with Abra-Melin’s secrets to his son Lamech. According to the text, Abraham met the powerful Egyptian mage Abra-Melin who taught him Kabbalistic magic. The text contains a complex and elaborate ritual for contacting one’s guardian angel and receiving magical secrets from him. In all, the ritual takes eighteen months. There are several other spells and magics contained within: the casting of love charms, flight, invisibility, and the ability to discover buried treasure.

The Key of Solomon is one of the most famous, important, and influential grimoires of all time. While it claims to have originated with King Solomon, it dates back to the 14th or 15th century Italian Renaissance. It inspired many other grimoires such as The Lesser Key of Solomon. The incantations and spells contained within were considerably powerful.

Before they could be performed the practitioner needed to confess his sins and be purged of evil, thereby invoking the protection of God. The text includes instructions for conjurations, invocations and curses to summon and control spirits of the dead and demons. In addition, it details all of the different purification rituals, special outfits, and mystical instruments that need to be used during said practices.

The Sefer Raziel Ha-Malakh Liber Razielis Archangeli is considered to be one of the definite and most important books on Jewish magic. It is supposed to hold all of the knowledge of the Universe. This particular grimoire was partially based off the aforementioned Sepher Ha-Razim. Both were bestowed upon prominent biblical figures by the archangel Raziel.

However, whereas the Sepher Ha-Razim was revealed to Noah, this was revealed to Adam. Supposedly, after being forced to leave the Garden of Eden with Eve, he prayed to God for guidance. God then sent Raziel to teach him the ways of nature through this text. It covers topics such as angelology, the zodiac, gematria (a system of assigning numerical values to words and phrases), protective spells, and talismans. It also includes a list of the various names of God. This text became especially prominent in German Renaissance magic along with the Picatrix.

The Liber Juratus claims to be the product of a conference of magicians who wanted to consolidate all of their knowledge into one text in order to save them from persecution be Church officials. At the time, the Church was trying to destroy all books of magic. In fact, one of the reasons why authentic grimoire are so rare was because the Church was so efficient at discovering and burning them.

The text is presented as a conversation with the angel Hochmel. The word “Hochmel” is a version of the Hebrew work “Chockmah” (wisdom). The book spans 93 chapters and a wide array of subjects, such as how to conjure and control demons, how to discover treasure, and how to save one’s soul from purgatory. One of the major features of the Liber Juratus is its methods for gaining the “Beatific Vision” where one receives a vision of the Face of God.

The Picatrix is widely believed to be a book of early Arabic magic. Originally written in Arabic, the Picatrix was one of the first and most important texts written about astrological magic. It also holds the distinction of being one of the largest grimoire in history. Although it is impossible to confirm who actually originally wrote it, it is frequently contributed to Andalusian mathematician Ahmad Al-Majriti.

It was translated into Latin in 1256 and went on to become extremely influential on Western magic, being used even by Renaissance mages like Cornelius Agrippa and Marsilio Ficino. It contained spells that ranged from “how to destroy a city with the Ray of Silence” to “how to influence men from a distance.” The text also had a list of magic images and detailed their uses. Frequently this would take the form of engraving the images of stars on specific objects.

The Kabbalistic tradition says that the Sepher Ha-Razim was given to Noah by the archangel Raziel and then passed down to King Solomon, one of the major figures of the Old Testament for his wealth, wisdom, and magical power. This text predates other major Kabbalistic texts such as the Zohar and the Bahir. It is split into seven sections, not including a preface, which mirror the seven days of creation and the seven heavens.

Each section contains a list of angels and spells that can be performed. These spells are of a wide variety. They can be used to heal, attack foes, predict the future, and bring good fortune. The incantations take many forms: repetition, reversed language, and foreign words and names. These spells also make use of ritual objects and animal sacrifices.

Summoning Demons – How To?