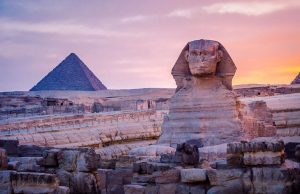 The Great Sphinx at Giza, sometimes referred to as the eighth wonder of the ancient world, is perhaps the most iconic symbol of Ancient Egypt.

The Sphinx is undoubtedly associated with the three great pyramids of Giza and many hope that one day it will help us understand the true purpose of these pyramids.

Over the past century, scientists have spent a lot of time studying the Great Sphinx, but there are still many questions that they still do not have answers to. 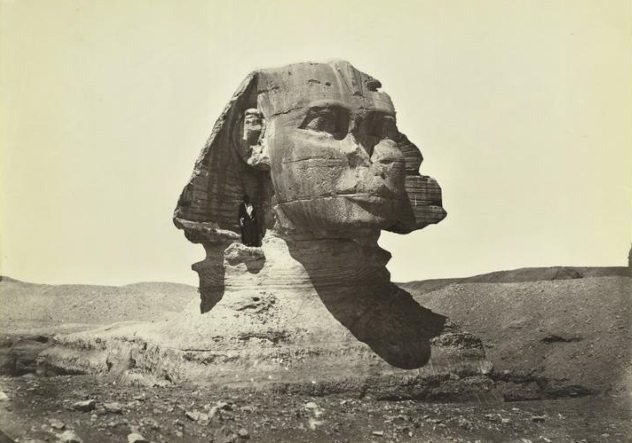 Buried in the sand

For thousands of years, the Sphinx has been covered up to its head with sand. It is a well-known fact that when Napoleon arrived in Egypt in 1798, he was delighted with the Sphinx, but also disappointed with its then state.

Only thanks to the perseverance of another Frenchman, Emile Barais, for the first time in thousands of years, the full body of the Sphinx was finally revealed to the world. Baraiz spent more than ten years clearing away the vast amount of desert sand around this ancient structure, and in 1936 it finally appeared before the world in all its glory.

The exact time of the construction of the sphinx and the moment when the sands began to sweep it up are unknown. Presumably, he is about 4500 years old, but there are theories where his age is increased to 6.7 or even 12 thousand years.

In the legend that tells about the conversation with the Sphinx of Pharaoh Thutmose IV (ruled in 1397-1388 BC), it is indicated that the Sphinx was already partially covered with sand.

Considering the thousands of years that have passed since then, and even taking into account the fact that Thutmose himself once unearthed the entire Sphinx, it can be assumed that the Egyptians in subsequent centuries somehow still tried to clean the head of the Sphinx from sand, otherwise it would have been would have taken over completely.

Carved from a single piece of rock

The Great Sphinx was originally carved from a single piece of limestone and has an impressive size of 73 meters in length and 20 meters in height. True, since then its original form has been partially replaced by stone blocks.

To say that this is an amazing achievement in the history of construction and architecture would be an understatement. And of course, there are many researchers who believe that people of that time simply could not do this and the Sphinx, like the pyramids, were created with the help of aliens, or alien technologies.

Or they were instructed by instructors from a more advanced civilization (immigrants from Atlantis).

By the way, the temple located next to the Sphinx was built from pieces of stone weighing more than 200 tons, which are believed to have been mined at the same time as the construction of the Great Sphinx.

No record of who built it

Despite the obvious importance such a sculpture must have had for those who built it, there are no inscriptions anywhere outside, on the surface or inside the Sphinx that clearly state who was responsible for its construction, why and when.

Many leading historians and Egyptologists insist that Pharaoh Khafre (Khephren) was responsible for its construction. This is mainly due to the mention of his name on a stone tablet, which has come down to us in good condition and is installed between the paws of the Sphinx. This is the so-called Dream Stele.

So those who establish the age of the Sphinx by the date of the reign of Khafre (the same 4500 years ago) obviously have very unreliable grounds for this.

The Sphinx was talking to Pharaoh Thutmose IV

According to ancient Egyptian legend, the man who later became known as Pharaoh Thutmose IV once settled down to sleep under the head of the Sphinx, which was already up to its neck covered in sand.

As he slept, he dreamed that the Sphinx was talking to him. The Sphinx told him that if he freed him from the sand, he would make him, Thutmose, the new pharaoh of Egypt. Thutmose was a member of the royal family, but was not entitled to the throne.

Waking up, Thutmose began to dig up the sand around the neck of the Sphinx and continued to do so until he dug it out entirely. After that, the Sphinx fulfilled its promise and Thutmose became Pharaoh Thutmose IV. This story is told on the Dream Stele mentioned above, located between the paws of the Sphinx.

A curious detail – Thutmose was the grandfather of Pharaoh Akhenaten, as well as the ancestor of Tutankhamun, people who had very long elongated skulls (much longer than other pharaohs), some diseases of the nervous system and not the most typical appearance for Egyptian pharaohs.

There is a ufological theory that Akhenaten and Tutankhamun, and possibly Thutmose IV, were the so-called hybrids of people and aliens, which would explain the anomalies of their skulls, strange appearances, as well as the legend of the talking Sphinx, who made Thutmose the ruler by interfering with existing rules succession to the throne. It’s just that the aliens really needed to put their hybrids at the head of Egypt.

The vast majority of Egypt’s vast deserts have yet to be scrutinized for ancient structures. There may be hundreds of structures buried under the ever-present sands. Some researchers even insist that there is a real possibility of finding a second Great Sphinx.

Some of those who promote this version are the researchers Jerry Cannon and Malcolm Hutton. The essence of his statement lies in the fact that in almost all images of sphinxes in ancient Egyptian works of art, the monuments are depicted in pairs.

This, they argue, must mean that another Great Sphinx (possibly destroyed) is next to one of the pyramids of Giza, opposite the first Great Sphinx.

These two sphinxes, according to them, represented for the ancient Egyptians the two main celestial bodies – the Sun and the Moon.

He was there “originally”

Although the Dream Stele does not indicate when the Sphinx was built, there is a curious line “I was here originally (from the first time)”. It is believed to refer to the so-called Zep Tepi times of ancient Egyptian writings.

It was a time when the Gods lived and walked alongside people. Something like the Golden Age, when everything was fine, there were no wars, diseases and other misfortunes.

Most historians insist that Zep Tepi is just mythology. Others, however, believe in the possibility that it was real time. One such researcher is Robert Beauval, who has spent decades studying the Sphinx, its origins and its meaning.

His theory, known as the Orion Correlation Theory, suggests that the Sphinx and the pyramids were aligned with the belt of the constellation Orion and perfectly matched the position of Orion’s belt that was in 10450 BC. This would increase the age of the Sphinx to at least 12,500 years, much older than mainstream historians claim.

While mainstream scholars insist that the Sphinx was probably built around 2500 BC, there is mounting evidence and ongoing research that suggests it is much older.

One researcher who has done extensive research into this claim is the geologist Robert Schoch, who claims that water erosion along the sides of the Sphinx is evidence of its actual older age.

According to Schoch’s research, this corrosion occurred over thousands of years from regular and constant precipitation.

According to the geological records, Egypt experienced major floods only between 7,000 and 12,000 years ago, and if it was these precipitations that left erosion on its sides, then it is likely that the Sphinx was built even before the period of great floods, that is, more than 12,000 years ago.

While mainstream historians claim that the Sphinx was built by Pharaoh Khafra and it is Khafra’s face that sits on his shoulders, many others argue that the original face of the sphinx was not human at all.

There is a hypothesis that at first there was a lion’s head, although this is rather controversial, because images of lions in such a pose are not known at all during the time of Ancient Egypt.

But such a pose is very suitable for dogs or jackals, so there is a theory that the head of the god Anubis was originally on the shoulders of the Sphinx.

The fact that Anubis, mostly depicted with the head of a jackal, is also considered the Guardian of the Necropolis (and the Giza Plateau is a huge necropolis), it is logically possible that a huge sculpture of him was erected next to the pyramids to guard the peace of the dead.

Maybe the Sphinx was actually Anubis when it was first built, and then its face was changed to satisfy the desire of some pharaoh (maybe the same Khafre).

Hall of Records under the Sphinx

There is a controversial claim that there is a hidden chamber under the sphinx, the so-called Hall of Records, and many researchers have spent considerable time searching for it.

Legend has it that the Hall of Records contains esoteric lore and complete archives of human prehistory, right back to the very beginning of time. It is assumed that this knowledge was left there by the inhabitants of the lost Atlantis, who ended up in Egypt while looking for a new home.

The well-known American mystic and “prophet” Edgar Cayce once stated that under the Great Sphinx there really is a room with ancient archives, and later repeatedly repeated this statement.

While many are understandably suspicious of Cayce—and his abilities in general—many others argue that his prophecies were often true, and that he could indeed correctly diagnose and even cure people of terminal illnesses.

Could he also be right about what is under the Sphinx? The only way to find out is to look around the place. This brings us to the first place on our list.

Was the artificial space under the Sphinx discovered?

In 1997, researchers Joe Jahoda and Joseph Shor conducted seismological studies that they claimed confirmed the presence of empty space under the Sphinx – and exactly where Casey said.

According to the researchers, they believed that this space was not some kind of natural cave or crack, but had exact right angles and was artificially created.

Shor and Jahoda further sought permission from the Egyptian authorities to excavate in the area, which they were denied. The ban on these excavations is still in effect.

Later, other research groups made similar requests to search for rooms or tunnels under the Sphinx, but their requests were also rejected.